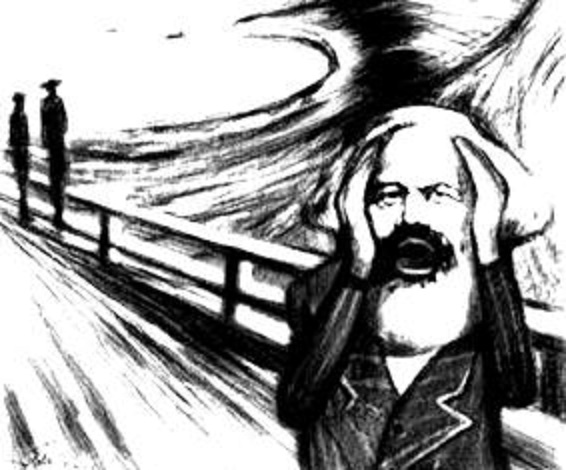 Surge Summary: Karl Marx’s favorite quote reveals why, despite all the lofty talk about it, socialism eventually brings destruction every place it is applied.

It is incredible how a failed theory—Marxism—continues to make inroads into the hearts and lives of millions of fellow Americans. A new poll out the other week found that for the first time, a majority of Democrats say they prefer socialism over capitalism.

FoxBusiness.com (8/12/21) reports: “A new Fox News poll showed that more Democrats favor socialism over capitalism, in a sharp reversal from just a year and a half ago. The poll…showed that 59% of registered Democratic voters who participated had a positive view of socialism, compared to just 49% who felt that way about capitalism.”

It’s possible in some cases that they are just simply mistaken about definitions—that they think capitalism means greed, where socialism means sharing.

No, capitalism means freedom to earn, whereas socialism means the government is free to steal from those who earn.

Everywhere around the world, we see the bitter fruit of Marxism. Everywhere his ideas have been put into practice, death, misery, loss of basic freedoms, and poverty follow. Can anybody name a square inch spot on the planet, anywhere, where Marxism has brought anything good? Certainly not in China, Russia, Cambodia, Vietnam, Cuba, Venezuela, etc.

And yet there are millions of Americans who have been brainwashed into thinking that Marxism is good, that it means compassionately sharing with others. No, it effectively means the government stealing from its citizens…for the sake of the ruling class to be enriched.

Here’s an example: Most Cubans live on $44 (U.S.) per month. In contrast, when Fidel Castro died in 2016, his net worth was estimated at $900 million. In America, wealth is created by providing value in voluntary exchanges, and there is no inherent limit on it. But in a Marxist setting like Castro’s Cuba, the government controls the economy, and it’s a zero sum game. Castro’s wealth was at the expense of the Cuban people.

Even Critical Race Theory, which is tearing many school boards apart, is merely repackaged Marxism, enforcing the never-ending Marxist principle of “oppressor” vs. “oppressed.”

And all of this gets back to a miserable anti-Christian man in 19th century Germany—Karl Marx. I recently learned from Dr. Paul Kengor something I didn’t know about Marx—his favorite quote. It speaks volumes. Kengor is a bestselling author and a professor of history and political science at Grove City College. I’ve interviewed him many times.

In his book, The Devil and Karl Marx, Kengor points out that Marx loved this line that comes from the devil character, Mephistopheles, in Goethe’s Faust: “Everything that exists deserves to perish.”

Dr. Kengor elaborates: “Friends said Marx would chant this. He would recite this—‘Everything that exists deserves to perish. Everything that exists deserves to perish.’ This is a philosophy that’s about tearing down, burning the foundation, leveling the house, to where you have Marx standing there in the smoldering embers, saying, ‘Now we are ready to begin.’ So anybody that thinks that this is a philosophy that is just about helping one another or sharing the wealth or redistributing wealth, they do not understand Marx and Marxism.”

And what do we see in our streets today? Destruction, riots, tear it all down. Let’s build a new and supposedly better world.

Ironically, Marx couldn’t even feed his own family. Even when he received a windfall of cash, he selfishly spent it all on himself. Marx couldn’t balance his own checkbook, but he presumed to tell the rest of the world how to run their economies. And everywhere his ideas have been implemented, they’ve driven their economies right into the ground.

Some people may naively assume that you can have socialism without the violence. But that is not the case. As Marx stated: “Socialism cannot be brought into existence without revolution.”

And what has been the results of atheistic communism because of Marx? Kengor writes, “A legacy of over one hundred million dead, not to mention the robbing of so many basic liberties and incalculable harm to so many souls has been nothing short of diabolical—truly a satanic scourge, a killing machine…It plagues us to this day.” (The Devil and Karl Marx, p. 402).

When there is no God to whom we must give an account, then the state can become god. That was certainly true in the minds of many a totalitarian dictator.

Why has America lasted all these years? For all the problems of America’s founding, the founders said our rights from God. The God factor is the key to America’s enduring success.

In contrast to Marx’s philosophy that everything should perish, Jesus said, “For God so loved the world that He gave His only begotten Son that whosever believes in Him shall not perish, but have everlasting life.” What a better approach to the world—and with infinitely better results all around the planet.

The post Karl Marx’s Favorite Quote — It Reveals a Lot About Socialism … appeared first on DailySurge.