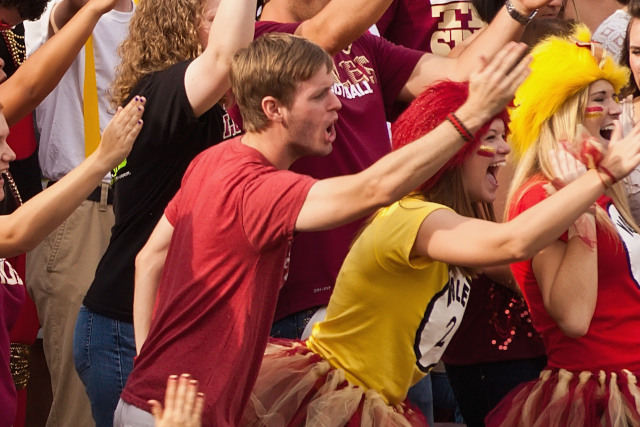 (TeaParty.org Exclusive) – It’s no surprise given the debacle that unfolded in Afghanistan over the past several weeks that Joe Biden would begin to get some very heavy pushback. There have been numerous polls done that demonstrate this trend with Biden’s approval rating hitting the lowest it’s been since the beginning of his term.

And now, according to Infowars, the American public is making it known how much they dislike Joe “I’m a thief” Biden — you know, for stealing the election — as thousands of fans attending college football games in some of the largest stadiums in the nation chant “F*** Joe Biden,” during the sport’s opening weekend.

Fans who showed up to watch the Coastal Carolina Chanticleers game against the Citadel Bulldogs this past Thursday were the first group of individuals to be recorded chanting the phrase.

Then, on Friday, the Virginia Tech Hokies hosted the North Carolina Tar Heels and fans of the Hokies started the same chant.

On Saturday, citizens of the state of Alabama attending the Auburn Tigers game against the Akron Zips also decided to join in on the action.

“Saturday night, the Texas A&M Aggies hosted the Kent State Golden Flashes in a 41-10 victory by the home team,” the Infowars report said. “In what was likely the loudest anti-Biden chant of the football weekend, the Texas crowd celebrated with yet another group chorus of ‘Fuck Joe Biden!’”

“When tens of thousands of college-age Americans are chanting this throughout the country, it’s clear the left is losing the culture war they rely on so heavily in order to push their Marxist agenda,” the report stated.

It doesn’t seem like this trend is going away anytime soon. And Joe Biden has no one to blame but himself. This all comes back to his horrible decision making involving the withdrawal of our troops out of Afghanistan which resulted in the death of 13 members of the military along with who knows how many Afghans.

Oh and the fact he abandoned American citizens behind enemy lines.

This isn’t the only case of folks giving Biden this kind of treatment. According to WND, there was an incident involving two suburban women and a very strong anti-Biden sign.

“Roselle Park has voluntarily dropped its efforts to get two suburban women to remove anti-President Joe Biden signage from their front yard for including expletives, after the New Jersey chapter of the American Civil Liberties Union (ACLU) announced they would represent the pair, NJ.com reported,” WND said.

“Homeowner Patricia Dilascio was ordered by Roselle Park Municipal Court Judge Gary Bundy to take down anti-Biden signs she had put up with her daughter, Andrea Dick, for violating a borough ordinance prohibiting obscenities, according to NJ Advance Media,” the report continued.

“The signs include lines like “F*** Biden and f*** you for voting for him” and “F*** Biden, not my president,” Law & Crime reported. They faced fines of $250 per day for not taking them down,” WND continued.

“It’s a relief,” Dick stated during an interview with NJ.com Tuesday morning. “My mother too, we both feel so relieved. I’m just happy this [is] all over.”

The local ordinance in question prohibits, “any obscene material, communication or performance or other article or item which is obscene within the borough.” The pair were then represented by ACLU attorney Alexander Shalom, who then appealed to the Superior Court in Union County, NJ.

“The First Amendment exists specifically to make sure people can express strong opinions on political issues – or any other matter – without fear of punishment by the government,” ACLU of NJ Executive Director Amol Sinha went on to say in a statement concerning the resolution of the incident.

“Today’s decision confirms that our position was correct: Roselle Park had no grounds to issue fines for a political sign and the town’s use of its obscenity ordinance infringed upon fundamental rights protected by the First Amendment,” she went on to say.

The mayor then stated the reason for the concern over the sign was due to the signs being close to an elementary school.