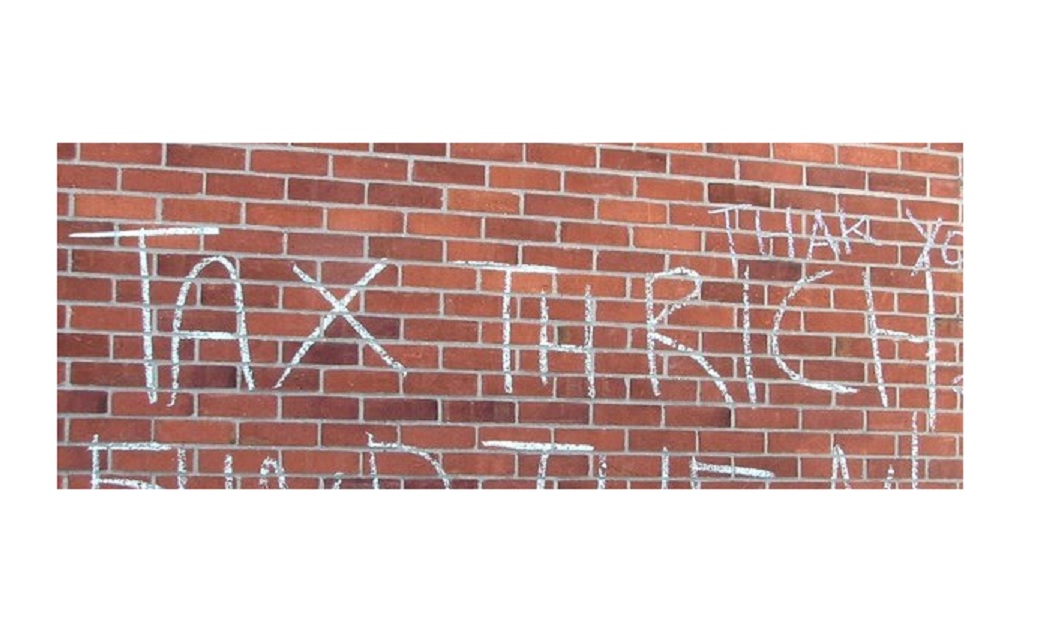 Surge Summary: The facts affirm, if a society wants to genuinely help the poor, the solution is not to punish rich people by constantly taxing them more.

There’s no need to pile even more scorn on Rep. Alexandria Ocasio Cortez’s “Tax the Rich” dress worn to a $35,000 per head gala. Social critics like Piers Morgan have already done this, joined by a chorus of conservative commentators and others online (such as here). Instead, I want to focus here on the whole “tax the rich” idea. When have we heard this before?

Although the phrase is common enough, especially during political seasons (which, these days, seem to be constant), when I hear those words, my mind immediately races back to 1971. That’s when the rock band Ten Years After, led by singer and guitarist Alvin Lee, released its hit song, “I’d Love to Change the World.”

The lyrics began with this opening stanza, followed by the refrain:

Everywhere is freaks and hairies

Dykes and fairies, tell me where is sanity

Tax the rich, feed the poor

‘Til there are no rich no more?

I’d love to change the world

But I don’t know what to do

So I’ll leave it up to you

For those who remember that era (and I certainly do, having seen Ten Years After perform four times back then during my hippie, rock drummer days), that was the spirit of the age. America needs changing, we thought, and we will lead the way in bringing about that change.

Materialism must go. The American dream must be abandoned. Military might must be renounced. In the words of John Lennon, we simply needed to declare peace: “Declare it,” he said. “Just the same way we declare war. That is how we will have peace… we just need to declare it.”

The problem, of course, was that life is not so simple, capitalism is not all evil, and life on a hippie commune was not everything it was cracked up to be. As for the American dream, the truth be told, the hippies quickly learned to be just as greedy, carnal, and materialistic as their much-despised parents.

Of course, there were wrong things that the hippie generation rejected, such as our increasingly pointless presence in Vietnam. And we were unsettled by the turmoil of the times, including the assassinations of JFK in 1963 and RFK and Dr. King in 1968. There was also a recognition that there was more to life than going to school, getting a job, and having a family so your kids could repeat the same process. To what end?

It’s just that, as Alvin Lee sang, “I’d love to change the world. But I don’t know what to do.”

Not all the goals of social justice warriors are bad. Not all the ideas on the left are absurd. It’s just that, the moment your goal becomes equality of outcome for all, you open the door to disappointment, pain, and even tyranny and death. And you end up with the Marxism of Animal Farm or the “equality” of N. Korea.

It simply will not work, and “taxing the rich” is never the simple solution to society’s problems (although it makes for a perennially good political slogan and helps to divide and conquer).

The reality is that “the rich” are already paying their share of taxes – and more. As reported by the Heritage Foundation, “The latest government data show that in 2018, the top 1% of income earners—those who earned more than $540,000—earned 21% of all U.S. income while paying 40% of all federal income taxes. The top 10% earned 48% of the income and paid 71% of federal income taxes.”

The rich, then, are already being taxed, quite substantially at that. And it’s a really bad idea to tax the rich even more to feed the poor – going back to the Ten Years After song – “’til there are rich no more.” In the end, if you get rid of these large money makers, you’ll end up with even more poor people.

For good reason Alvin Lee confessed that he didn’t know what to do. Would that more of our politicians would make a similar confession.

The Heritage article cites economist William McBride, who “found that ‘nearly every empirical study of taxes and economic growth published in a peer-reviewed academic journal finds that tax increases harm economic growth.’” And a bad economy is bad for everyone.

That message is always relevant, which is why Paul gave these instructions to Timothy regarding rich Christians: “Command those who are rich in this present world not to be arrogant nor to put their hope in wealth, which is so uncertain, but to put their hope in God, who richly provides us with everything for our enjoyment. Command them to do good, to be rich in good deeds, and to be generous and willing to share. In this way they will lay up treasure for themselves as a firm foundation for the coming age, so that they may take hold of the life that is truly life” (1 Timothy 6:17-19).

As for the “tax the rich” slogan, it is as useless as it was out of place on AOC’s dress.

If we really want to change the world, this is not the way.

The post ‘Tax the Rich’: It’ll Fail Again, Just Like It Has in the Past appeared first on DailySurge.