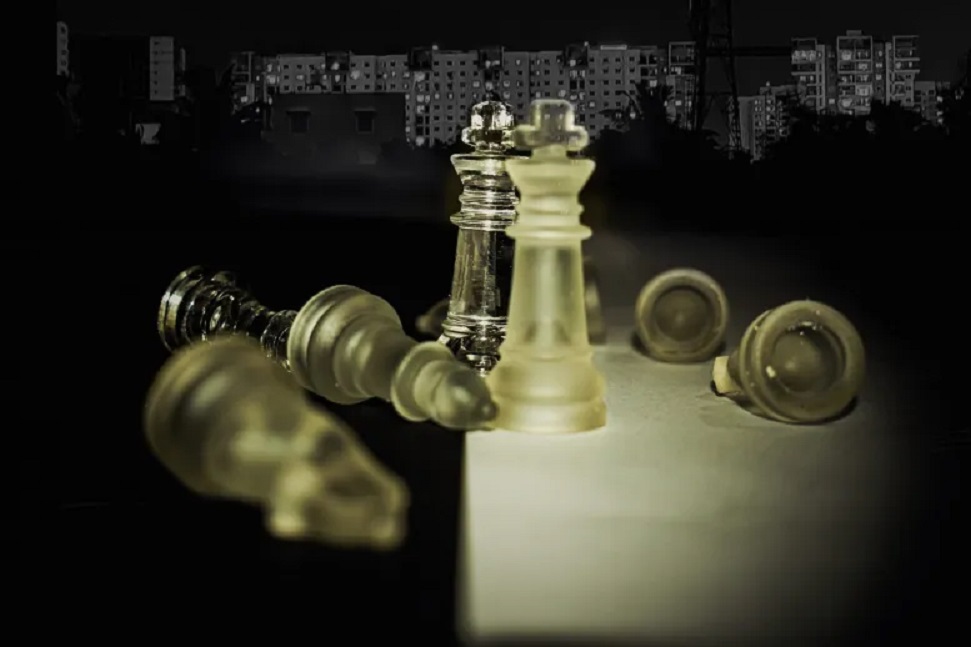 Surge Summary: More challenging biblical truths that will be inconvenient to those following the spirit of this age but are fundamental if Christians are to successfully impact the world around them.

As mentioned at the end of last month’s installment, there are quite a few truths in scripture that would seem to be very “inconvenient” for the modern church to grasp when it comes to current circumstances.  Because of the wealth (i.e. length) of material, only three “inconveniences” were listed in Part 1.  Those were Biblical truths regarding Immigration, Handouts, and Fear.  We’re going to conclude this short series with four more “inconvenient truths” Christians should sincerely and prayerfully start to consider.

More and more we’re seeing that as the country is intentionally divided, so is the church.  Some mainstream denominations such as the UMC have completely embraced Critical Race theory while others are vehemently fighting it.

COVID has been another cause of some extreme division.  Two examples of this, and the prevailing attitudes, were given in last month’s article.

Not surprisingly, all of this has led to accusations of being judgmental. hurled from both sides of the divide.  Taking a closer look at the verses from Matthew Chap. 7, the difference between judgment and discernment should become apparent.

“Judge not, that ye be not judged”, Mt. 7:1, is followed by the next four verses that plainly discuss the utter hypocrisy of judging someone when we ourselves have issues.  At this point, judgment is viewed as purely subjective, with whatever empathy we might have passing through our emotional filter.

By contrast, discernment is an intellectual quality.  A proper definition for the word discern is “to come to know or recognize mentally”; likewise discernment is “the quality of being able to grasp and comprehend what is obscure”.  Discerning means “showing insight and understanding”.

All of this is based on intellect and not emotion.  It’s probably not coincidental that “discerning of spirits” is one of the Gift of the Spirit (1 Cor. 12:10).

Mt. 7:20-“By their fruits, shall ye know them”, is an intellectual, educated response to false teaching and blatant lying.  This applies not only to teachers of the Word, but to any organization (i.e. business, school, agency, etc.)  The usage of “their” and “them” indicates plurals.

You therefore have the right to “judge” them based on their fruits, meaning what they produce, provide, give forth, make available to the public, etc.  1John 4:1 couldn’t be more clear: “Believe not every spirit but test the spirits whether they are of God, because many false prophets are gone out into the world.”

Therefore, as Christians, we have the ability to know and be aware of what is happening around us.  Doing so is not being emotionally judgmental.

It shouldn’t have to be stated that as Christians, we know where our true power comes from.  Unfortunately, we’ve been told what happens when we lose the source of true power.  2 Tim. 3:1-5 predicted the apostasy of the Church.  Most of us are probably familiar with v. 5 “…having a form of godliness but denying the power of it; from such turn away.”

The true power of belief has always been recognized, though.  Isa. 40:29 states “He gives power to the faint”.  Micah 3:8 in turn says to be “…truly full of power by the Spirit of the Lord”.

The writings of Paul have a lot to say regarding true power.  He recognized his power was in Christ, regardless of his own weakness and the physical thorn in the flesh (2 Cor. 12:7-10).  He knew his own understanding was weak, and only made strong through the Lord’s power (Eph. 1:18-23).

One of the most succinct verses in regard to how Paul felt about the power of Christ revolved around his personal resume’ as a religious Jew.  (Philippians 3:4-10) In verse 8, he makes a somewhat graphic comparison of his best efforts to the power of Christ.

“…Because of Him, I have suffered the loss of all things, and consider them filth, so that I may gain Christ”.

The word “filth” is translated as “dung” in the KJV.  In the original Greek, the word is “skubalom”, meaning “animal excrement”.  That would be, well … uh, B.S. in our vernacular.

Keep in mind that Paul in his era had the equivalent of three PhDs. Yet compared to the power of Christ, he knew his best efforts were … excrement.

This is the attitude the church must have, if we are not only going to survive but also thrive regardless of what’s coming our way.  Time to lay the worldliness, religious narcissism, and just plain “better than thou” arrogance aside.

Stewardship doesn’t sound like something that could be “inconvenient” or even controversial.  By definition, a steward is “someone employed in a large household or estate to manage domestic concerns, supervision of servants, collection of rents, and keeping of accounts; a manager.”  Stewardship is “the careful and responsible management of something entrusted to one’s care”.

All of these references focus mostly on honesty in regard to property and finance.  As Christians, though, our stewardship encompasses everything.  “All things come from Him. (1 Chron. 29:14); “Through Him are all things.” (Rom 11: 36); “The earth is the Lord’s and the fullness there of.”  (Ps 24:1) Of course there are more examples than these but the point is that everything we have as people-our possessions, our property, our families, our work and responsibilities, our health, and even our very lives-are all from God.  We are therefore stewards of our very existence.

And stewardship comes with responsibility.  This is where the “inconvenient ” part comes in.  In Luke 22:36, as Christ was preparing the disciples for ministry in the world, He told them “he that hath no sword, let him sell his garment and buy one.”  It was stated that they actually had two. Nonetheless, Christ recognized the need for self-protection.  Keeping yourself, your family, your property and possessions safe, even with a weapon, is exercising your role as a steward.  Self-protection is a God given right recognized by Christ.

Especially if you have a family, it is your duty to protect them as well as yourself.  And it would be going against God’s principles of stewardship not to protect even the possessions that He has enabled you to acquire.

We don’t arm ourselves to cause trouble.  That would not be good stewardship.  But neither is allowing ourselves to be victims.  Given the state of the country now, this is one “inconvenient truth” a lot of God’s people will have to start understanding.

Back on August 18th of 2017, I posted an article entitled “Yo, Christians: Do You Still Think Being Political Is A ‘Bad Thing?’”  The main theme of the article was that the Bible is actually full of politics, and I focused on four specific examples in scripture: 1) Moses dealing with Pharaoh 2) The Book of Nehemiah 3) The Trial of Christ 4) Paul at Mars Hill (of the Areopagus Court) in Athens.  You can check out the article for yourself, but this time I want to take a closer look at Nehemiah.  It offers one of the best examples of what a believer can accomplish when working within a political system.

Nehemiah records some of the last history of the Old Testament, taking events up to about 430 BC.  Biblical scholars believe that Nehemiah was a Jew born in captivity in Babylon. He served as King Artaxerxes cup bearer (Neh. 2:1), which gave him close personal and often confidential contact with the king.  He was the person responsible to see that the kind drank nothing poisonous.

After receiving a burden for the state of disrepair Jerusalem’s walls were in (Neh 1:4-10), he prayed (Neh. 2:2-4) before sharing this with the king.

The king granted him permission to leave, gave him travel letters (a sort of passport), gave him an escort, transportation, materials, and man power (Neh. 2:5-9).

Of course the Book of Nehemiah is far more detailed than this, but the point is this:  look at what a believer can accomplish with prayerful consideration while working within an existing political structure.  This is one of the best examples of why Christians need to be political and get involved.

There’s an old saying that all politics are local, which is falsely attributed to former Speaker Tim O’Neill, but can be traced back to 1932.  The point, though, is that you have to get involved at the bare bone, grass roots level with political entities such as the school board, town council, board of public works…whatever.  We still have the 1st Amendment right of freedom of assembly.  Better start using it before they take it away.  We’ve already seen the Dems do this sporadically with the Wuhan Kungflu Overreaction nonsense.  While our rights come from God, it’s up to us to be more diligent in keeping them…and this starts by working within the system while we still can.

I want to provide a reading list that’s pertinent to what was discussed in these two articles.

Hitler’s Cross (How The Cross Was Used to Promote the Nazi Agenda) By Erwin W. Lutzer

I also want to say thanks to Steve Pauwels for pointing out that Egypt had been subjugated by the Romans in 30 BC.  Therefore, Joseph, Mary and Baby Jesus were not technically “refugees” to another country.  They simply went west to another part of the Roman Empire.  It’s the equivalent of someone “fleeing” from Ohio to Iowa…you’re still in the same country.

Along with some very good reviews that my new CD “Salt 2: Trophy Hunting for Unicorns” has received, our YouTube page continues to get more and more views. And, we’ll continue to add new videos on a weekly basis. Please check out the following:

Image: CC0 – Free to Use; https://pixahive.com/photo/chess-pieces-2/

The post Biblical Truths That Are Inconvenient for the ‘Woke’, Part 2 appeared first on DailySurge.