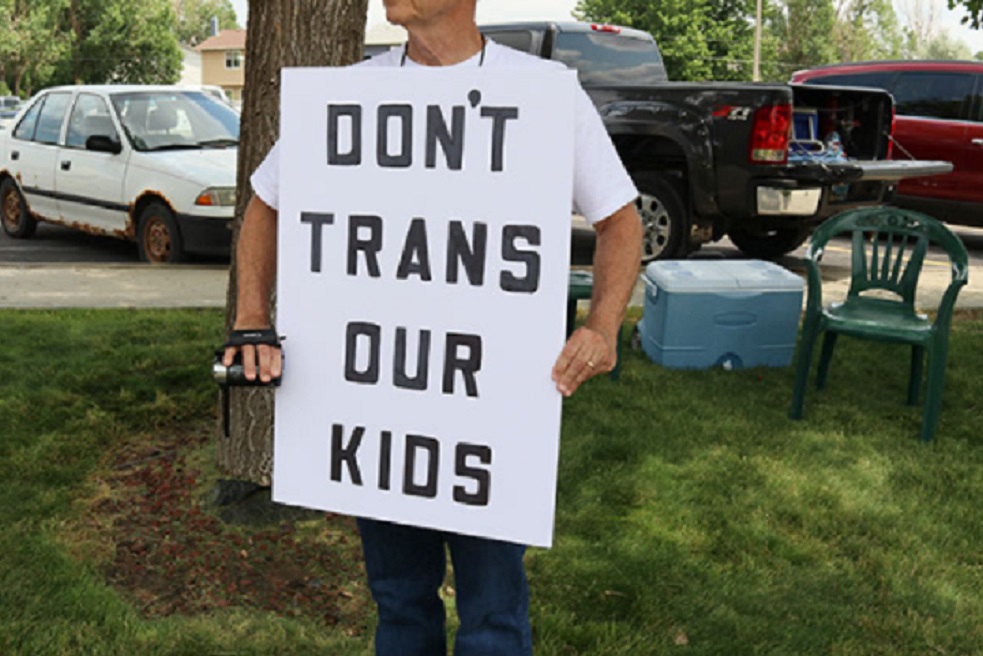 Surge Summary: When a group of Wyoming parents and Christians oppose a “trans” magician coming to their local public library, they are viciously attacked, a church building is defaced, church goers are threatened – but they refuse to back down.

Even in conservative northeast Wyoming, LGBT activists are aggressive in their efforts to proselytize children – and vicious towards anyone who opposes them.

When the public library in Gillette invited a “transgender woman” (a man) to perform children’s and teens’ events, the local MassResistance citizens prevented that from happening. In retaliation, library officials spread exaggerated stories about supposed “threats” and the national media got involved to purposefully inflame the situation. Wyoming MassResistance responded with a demonstration to show they weren’t intimidated. LGBT activists retaliated by defacing a local church and threatening a Sunday morning protest. But the church members also refused to be intimidated.

The public library’s assault on youth

Earlier this summer local citizens in Gillette, WY began to notice that a lot of pornographic and homosexual and transgender themed books had appeared in the children’s and teen sections of their local branch of the Campbell County Public Library. On July 7, they came to their County Commission meeting to voice their outrage and demand something be done. A few of the Commission members seemed concerned but they didn’t do anything.

At that same meeting, the Library Director spoke and defended the books! It turns out she was just getting started.

Here’s what happened over the next several days:

A few days after the County Commission meeting, the library announced that it had booked a magician-comedian to perform for kids at the Campbell County Public Library. This performer is a “transgender woman” (a man who pretends to be female) who calls himself Mikayla Oz. He was scheduled to perform at the library on July 14 for “school age kids” and again on July 15 for “teens only.” The library was also paying for Oz to perform at the local Boys and Girls Club.

To parents and other citizens, this was clearly another in-your-face push by the LGBT movement on the local youth by the radical library staff. It was particularly disturbing given the recent history of some “transgender” entertainers for children at public libraries turning out to be convicted child molesters. That possibility was apparently of no concern to the library staff; they admitted that they had not attempted any background check on Oz.

This was part of a larger social media campaign by the library to attract younger kids to the July 14 event and teens to the July 15 event.

Before long, a recent YouTube video surfaced in which Oz drops his pants and cavorts about in underwear (revealing he was a man), and suggests that a “wild ride” was ahead for the coming year. The entertainer projects activism all across his YouTube page, and local parents were understandably outraged.

On Sunday, July 11, three days before the event, the Wyoming MassResistance group met to discuss what to do. They decided to hold a protest in front of the library during the first day of the event, Wednesday, July 14. This sort of protest is rare in Gillette, so it would definitely send a strong message! They also decided to use social media to spread the word about the event (many people were unaware) and also the protest. The news traveled quickly.

Word also got around that the Executive Director of the statewide LGBT group “Wyoming Equality” was coming to Gillette to lead a counter-protest to harass the parents who were protesting. So the parents met with the local police department to make sure there would be a police presence there, and that all would remain peaceful.

The “magician” decides to cancel his performances because of upcoming protest

On July 13, the day before the first event, Mikayla Oz announced he was cancelling all his shows in Campbell County (Gillette Library, Wright Library, and Boys and Girls Club). The reason he gave, according to a County Commissioner who spoke with him, is that he didn’t want children coming to his event to have to deal with a protest. It was a victory for the parents!

Library claims that cancellation was because of “threats”

Within hours after Oz’s decision to cancel his shows, the library staff posted a notice on Facebook that Oz had decided to cancel because of “safety concerns.” This contradicts what Oz had told the County Commissioner.

The library’s notice said, “The cancellation came after threats were made directly to Oz and to library staff.” But no police report was filed, which is very suspicious given the gravity of the charges.

What exactly were the alleged threats?

Library Director Terri Lesley later told a Gillette newspaper that a local man had come into the library and said to one of the staffers that “there had been a parent meeting and that he was upset – and that we should close the library because it wasn’t safe to be there[.]”

In addition, Oz (who by then had changed his story) told the newspaper that he received a phone call saying “You better not f—- come to Gillette. If you do, there’ll be issues.” Oz said he’d received an email with a similar message.

There were no “threats” noted. People in Gillette have told us that they can’t believe that these could be considered actual threats, especially since the library didn’t bother to file a police report. The parents also can’t imagine any of them saying or writing even those things. It seemed more like an attempt by the library and LGBT activists to save face and demean the parents.

As one local citizen wrote:

This “harassment” narrative was obviously cooked up to give individuals involved in child exploitation some sort of legitimacy, where in reality there was none. The idea was to smear the community who spoke out against a man pretending to be a woman that wanted to perform in front of children.

The library also said that “misinformation about the performances was spread via social media.” But they didn’t say what the so-called “misinformation” was. Why not?

The parents and citizens hold the protest anyway

Even though the transgender performer’s shows were cancelled, the parents decided to hold the protest anyway. They wanted to send a strong message to the library about this, and also show the community that conservative voices are not backing down.

The protest was a great success! People liked it. The library staff hated it. And the LGBT counter-protest never materialized.

The LGBT movement is very skilled at sensationalizing an otherwise mundane story and getting it covered by the media – and expanding it nationally (and even internationally). That’s exactly what they did with this.

Within a day, the story was screaming across the country and beyond. And the “threats” had now morphed into “violent and frightening threats” and “death threats.” Of course, Oz was only referred to as a “she.” Here is a sample of the coverage:

The day after the protest, Thursday, July 15, people who came to the Central Baptist Church in Gillette saw that the church had been defaced with ugly LGBT messages. The church was targeted because the pastor, Rev. Scott Clem, had been outspoken at the recent County Commission meeting about morality and the public library.

Besides the vandalism, there were threats against the church, and LGBT activists had announced that they were going show up at the church that Sunday morning to protest and harass churchgoers.

For example, on Thursday morning the church workers saw the following message from the night before – a threat and a promise to come and protest:

On Sunday three police officers showed up in case the protest got out of hand. But there was no protest. Instead, there was a robust response from the community! Besides the congregants, a dozen or more people from different denominations came to show solidarity with Pastor Scott. One couple even drove 240 miles from Cheyenne, Wyoming.

This was a great victory! The fact that the LGBT movement and the library staff reacted in the extreme and dishonest way they did indicates that the parents are hitting the nail on the head. They intend to protect vulnerable children (and the public funding) from that poisonous agenda and are not the least bit afraid or intimidated.

The Left is used to dealing with conservatives who are more fearful and less resolute. That’s not happening in Gillette, Wyoming!