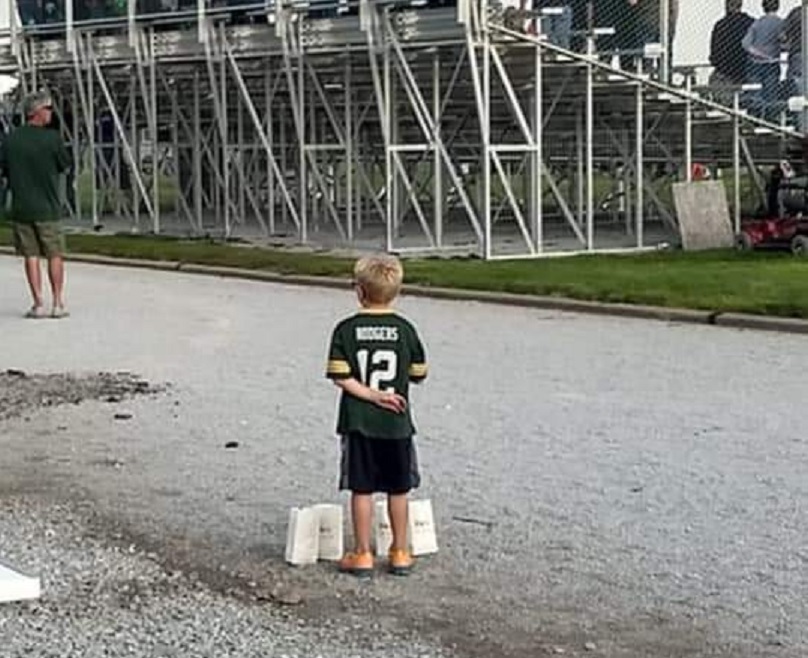 Surge Summary: Recent images of patriotic youth stir hearts across America and highlight undying principles which can make for a better world.

For a few weeks now, a photo of what seems to be a preschool-age boy at, presumably, an unidentified sporting event has been making the social media rounds. His back is to the camera. He’s standing erect, looking straight ahead. The particular text I received with the shot featured this caption: “This little boy set down his 4 bags of popcorn while the National Anthem was being sung at Loomis, NE. Somebody’s doing something right!!”

On pages displaying the delightful image, a raft of accompanying comments consistently lauded his upbringing: “God bless his parents”; “At least he was raised right”; “His parents are doing a wonderful job”; “Salute the parents”, etc. I confess, those thoughts echo what was my initial reaction as well.

The photo has garnered oodles of other positive sentiments: lots of shares and boatloads of “likes”. Some contributed their own captures of scenes in which their child or other little ones are unashamedly committing patriotism in public.

Curiously, around the same time as the Loomis, NE photograph went viral, visuals of another slice of stirring, impromptu Americana gained media attention. From WTHR TV:

“A pair of Indiana boys … were riding their bikes in Batesville [Indiana] when a funeral procession entered a cemetery as they rode by. Jacqi Hornbach was watching from afar and snapped photos of the procession and the boys as they stopped their bikes to pay their respects. … ‘They immediately stopped riding, got off their bikes, and stood with respect as Taps was being played,’ Hornbach said in a Facebook post.”

The photographer offered a further reflection — one which might be starting to sound delightfully familiar: “Their parents should be so proud”. 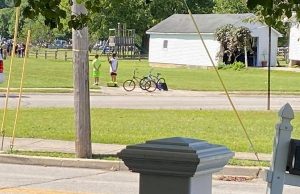 Turns out one of the lads is an eight-year-old named Lane Moody. His father admitted on Facebook: “I always w[o]nder if anything i say sinks in” — then, adding, “obviously more than I thought!”

Attaboys from many another Facebooker followed.

Here is this column’s confession number two from me: Reading this account brought tears to my eyes.

Especially in 2021, it’s fascinating to discern the reflexive response produced by episodes like these. True enough, crediting an individual’s rearing when he/she exhibits patently admirable behavior is a bit of a cliché. But, as has been said elsewhere of clichés, stereotypes and the like: their banality, even corniness, doesn’t automatically mean they don’t sometimes — perhaps even frequently — contain a dash of truth.

From the second incident cited, it’s apparent dad has taken a run at inculcating a certain ground-level decency and love of country into his scion. I suspect a skoche of investigation would uncover a comparable discovery about the Nebraska boy’s home-life.

Another not-terrifically-original but piercing theme was vocalized by observers of this pair of images:

“These two boys give me some hope for our future,” wrote one poster. “Respect!!!! We still have hope and not everything is lost!!!” seconded another.

Of the popcorn-toting patriot, “Trkstr” tweeted: “There is still hope for the new generations”.

Contemplating these exhilarated reactions collectively, it’s tough to miss the formula they outline: sound hearth and home produces well-adjusted offspring which generates some — at least a shiver of — optimism for a society’s (and nation’s) prospects.

Author and President of the American Association of Christian Counselors Dr. Tim Clinton has recently stressed,

(Don’t miss that “identity” reference … seems we’ve been hearing a lot about that concept the past decade or so; and not always sensibly.)

Clinton continues, striking a chord of, yes, hopefulness: “We may not be able to change national trends instantly, but the fact is we can dramatically shape the cultures of our homes, which in turn shape the course of our nation”.

Looking for ways to apply the above principles? The AACC president suggests an eminently pragmatic one, underscoring the power of family meals. Teens, it seems, who enjoy them on a regular basis struggle with dramatically fewer pathologies than those who don’t: less depression and drug use; higher marks in school.

We are talking about doing something you already do three times a day. Just do it with family, do it regularly, and work to make the experience enjoyable, loving, and even inspiring if possible. This changes lives. And these lives in turn will transform other lives.

Clinton’s prescription is simple but challenging: mothers’ and fathers’ purposefully building households which will impact the lives of their children for the better; raising their kids to become deterrence against every cancerous trend and social current that would harm not only them but the world around them. Parents are to labor to that end daily; with intentionality; with expectation.

Imagine a flood of young people who recognize America isn’t all bad, that the country, in fact, has often acted a force for good around the globe; that the Republic’s founding ideals were brilliant, noble, history-transforming; that those who’ve done a stint in the U.S. military deserve kudos; that all life is sacred, biological sex a reality, marriage designed for husband and wife; that men should treat women with respect (“ho”, “slut”, “b*tch”? Out of bounds); that children’s default mode toward adults ought to be civility; that government should be limited, taxes low, a civilization’s accent on freedom and personal responsibility; that hard work, earnings, success, profits(!) should be celebrated; that the philosophical underpinning of the United States was, commandingly, biblical truth.

Imagine a generation of that stock maturing into grown-ups — influencers — moving out every day into the world and molding the zeitgeist for decades to come.

There’s a reason the Psalmist stylized children as arrows in the quiver (Ps. 127:3-5): They are to serve as shafts launching forward (i.e., into the future). They are to be loosed as missiles of aggressive truth against deleterious forces of deception. In fact, if a land is to endure, they must be devoted to those purposes.

Nowadays, the notion of responsible moms and dads raising responsible kids is being increasingly marginalized. Traditional families certainly aren’t heralded as they once were. But over two centuries ago the great Edmund Burke avowed it’s the “little platoons” – church, fraternal organizations, home – that play an indispensable role in determining what happens in the atmosphere around individuals, in their day and those that follow.

Snapshots of a handful of previously unknown youngsters have modelled the vitality of that timeless principle. It couldn’t have come at a more crucial moment.