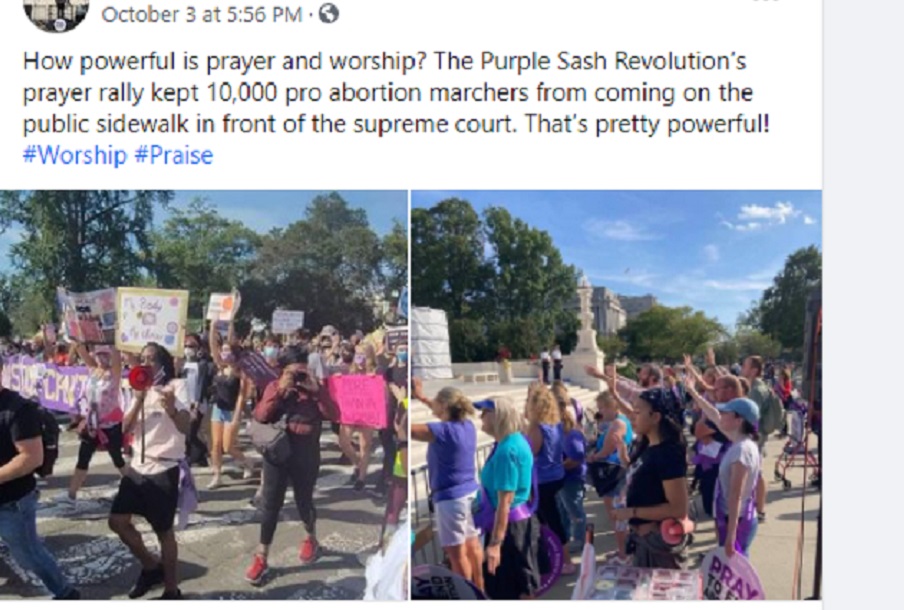 Surge Summary: A recent encounter in front of the Supreme Court building between opposing sides on the abortion issue is a convenient visible expression of America’s current state: Is it time for the nation to divide into two camps? How can pro-lifers respond appropriately and effectively to “pro-choice” advocates?

Was there a time in living memory when America was more divided? I’m 66, and I certainly can’t remember any time like today. Can you?

It seems as if the right and the left are becoming more and more polarized, with less and less people in the center. From woke ideology to race issues to political divides to LGBTQ activism to religious conflicts to cancel culture to immigration, the divisions are deep and broad.

But the ultimate dividing line is abortion. On no other issue are the passions so intense. And no other issue has such massive court cases attached to it.

The clearest illustration of the intense divide took place in Washington, DC this past [October 2], when a pro-abortion women’s march came face to face with a pro-life prayer service on the steps of the Supreme Court. Talk about seeing this conflict in real time and in living color!

To give the background, a couple of months ago, my friend Rev. Patrick Mahoney, who has been involved in pro-life work for 44 years, felt prompted to set aside October 2 for a special prayer meeting in DC in front of the Court.

He picked this date because the Court would be resuming its session on Monday, October 4, and it is during this session that the justices will hear the Dobbs case from Mississippi, billed as “the case that could overturn Roe v. Wade” (see here and here for examples). Having worked with DC police for decades, Pat received the necessary permits to hold a peaceful, non-political, prayer and worship meeting from 2-4 PM on the 2nd.

Then, just weeks ago, after the Supreme Court let the Texas Heartbeat Bill stand, pro-abortion activists called for marches on this very same day in cities across America, including DC. And, as if it was all scripted, the “Rally for Abortion Justice” in DC was scheduled to end at the Court building the same time the prayer meeting was scheduled to begin. I kid you not.

As it turns out, the pro-life worshipers were already there by the time the marchers arrived, and the police were prepared for the moment. But it was the very presence of these worshipers that kept the marchers from advancing to the Court’s steps.

Could this be symbolic of things to come? Could this be a physical sign of a spiritual victory? Let us hope and pray that it is.

But it is not only in DC that unusual things are happening.

Within the last week, two sitting Supreme Court justices, one on the left and one on the right, both spoke out about the Texas bill.

This past Wednesday, Justice Sonia Sotomayor said to an audience of law students, “You know, I can’t change Texas’s law. But you can, and everyone else who may or may not like it can go out there and be lobbying forces in changing laws that you don’t like.”

Then, on Thursday, Justice Samuel Alito told students at University of Notre Dame that the media was unfairly reporting on the Court’s decisions and the processes involved in their decisions. He said, “The catchy and sinister term ‘shadow docket’ has been used to portray the court as having been captured by a dangerous cabal that resorts to sneaky and improper methods to get its ways. This portrayal feeds unprecedented efforts to intimidate the court or damage it as an independent institution.”

He added, “Journalists may think we can dash off an opinion the way they dash off articles.”

When can you remember something like this happening, when, in the very same week, two Supreme Court justices made public comments about very live issues before the court? And is it any surprise that both of them addressed one particular case, namely, the Texas Heartbeat Bill?

Added to all this are the results of a recent poll which, according to Newsweek, indicated that “Roughly 52 percent of people who voted for Republican former President Donald Trump either ‘somewhat agree’ or ‘strongly agree’ that it’s time to split the country, favoring that either red or blue states secede from the union, the poll found.

“Comparatively, 41 percent of people who voted for Democratic President Joe Biden agree with the idea.”

In perhaps the understatement of the year, Daniel Villareal, writing in Newsweek, said, “Splitting the country would likely cause massive conflict.” And abortion will certainly be front and center when it comes to this massive conflict.

For the pro-choice side, this is really a matter of life and death. A matter of “my body, my choice.” A matter of health and security and freedom. (For my open letter to these women who see abortion as a fundamental, Constitutional right, see here.)

For the pro-life side, this is also a matter of life and death. A matter of stopping the shedding of innocent blood. A matter of standing with “the least of these.” A matter of doing what is best for the mothers as well.

My counsel, then, in the midst of this conflict, which will only intensify should the Mississippi heartbeat law be upheld in the Dobbs case and which will absolutely explode if the Court overturns Roe v. Wade, is this.

First, be much in prayer for the Court to do what is right in God’s sight and for a culture of life to arise in our land. The fate of the nation could be at stake.

Second, walk in love and patience towards those who differ. Let us smash the negative (and false) caricatures that surround the pro-life movement with our kindness and our patience. Do your best to be Jesus to the pro-choice people you meet.

Third, take time to listen, and then to share the love of God if possible. Ask those on the other side why they feel the way they do, taking a genuine interest in their own wellbeing. And if the door is open, share the gospel with them.

Fourth, make the case for life, starting with the humanity of the baby in the womb. (Again, see my open letter for more on this.)

Fifth, make pro-life voting a priority in the years ahead. Let us elect those who will stand with the unborn.

Which way will America go? A lot of that has to do with you and with me.