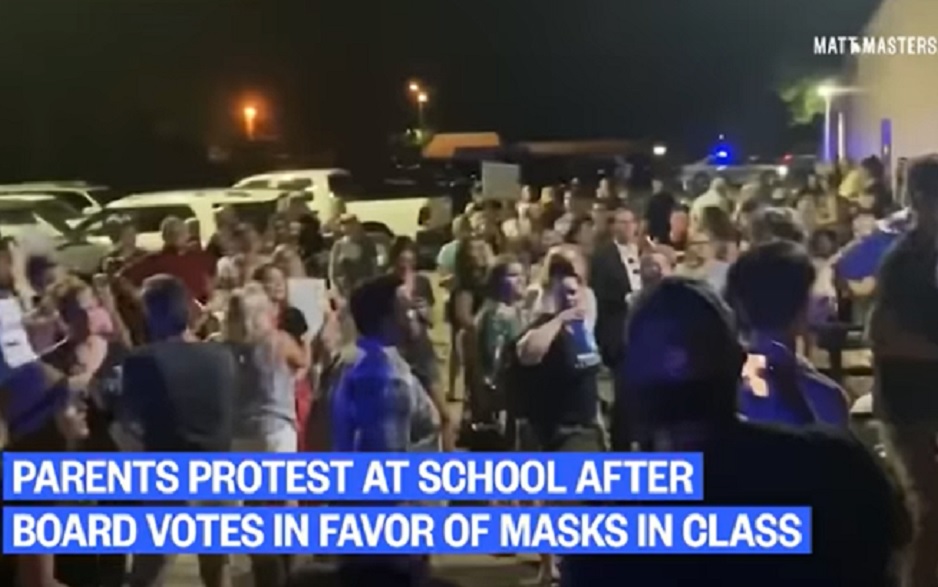 Surge Summary: Some U.S. school employees are wanting federal law enforcement to consider complaining parents “domestic terrorists” – so it would become a crime for parents to forcefully express their concerns about what is going on in their children’s school.

Congress shall make no law respecting an establishment of religion, or prohibiting the free exercise thereof; or abridging the freedom of speech, or of the press; or the right of the people peaceably to assemble, and to petition the Government for a redress of grievances. -Amendment I of the Bill of Rights to the US Constitution

When I saw the headline coming from the Daily Mail, I knew that it was the criminal politicians that were hiding behind these criminal board members. In the end, they could use it to safeguard themselves against the people that they are to serve.

“Teachers call angry parents terrorists: School officials beg Biden to send in the FBI to protect them from ‘extremist’ parents angry over vaccine and mask mandates and say it should be treated as ‘domestic terrorism’”

What is happening here is that the federal and the state governments would like to have their way with your children regardless of if it is illegal or not (Exodus 22:23).

After speaking at 364 high schools in 25 different states, I have heard principals tell me that the “science and the history books are being changed every 3-7 years” (Hosea 4:6).

This Is How The People’s Representatives Should Be Upholding The Law Against ALL Crimes! (Video)

According to this report:

An institution representing more than 90,000 school officials across the US begged Joe Biden Wednesday to send FBI and Secret Service agents to protect them from ‘mobs’ of angry parents irate over vaccine and mask mandates forced upon their children – asserting their protests should be treated as ‘domestic terrorism’ by ‘extremist hate organizations.’

In a letter penned to the president and published online, the National School Boards Association implored the US government to take a stand against these vexed parents, stating that teachers and other school staffers are under ‘immediate threat’ because of their burgeoning ‘acts of malice, violence, and threats.’

The complaint, signed by NSBA President Viola Garcia and Interim Executive Director and CEO Chip Slaven, called upon Biden personally to and use his executive power to mobilize FBI and US Secret Service agents to guard school officials.

There were 11 pages deep of the propagandists striking at the same time. Translation: They are trying to defend themselves concerning the crimes they are intending to commit.

Conclusion: “Domestic terrorists” are protecting their children from those who are indoctrinating, from predators and those that are illegally mandating masks and experimental jabs. Who are the actual domestic terrorists, the parents or those in the federal government?

The criminals in the federal government are wanting to use agencies against the people in transgressing the law that they all swore that they would uphold.

Furthermore, maybe these fools, and fools they are, should take the time and read the 1st Amendment of the Bill of Rights which states:

“Congress shall make no law respecting an establishment of religion, or prohibiting the free exercise thereof; or abridging the freedom of speech, or of the press; or the right of the people peaceably to assemble, and to petition the Government for a redress of grievances.”

Parents have every right given unto them by God to confront corruption wherever it may be (Psalm 94:16).

This is nothing more than an attempt to garner more control over the lives of the children while playing the victims. Nothing new here (Ecclesiastes 1:9).