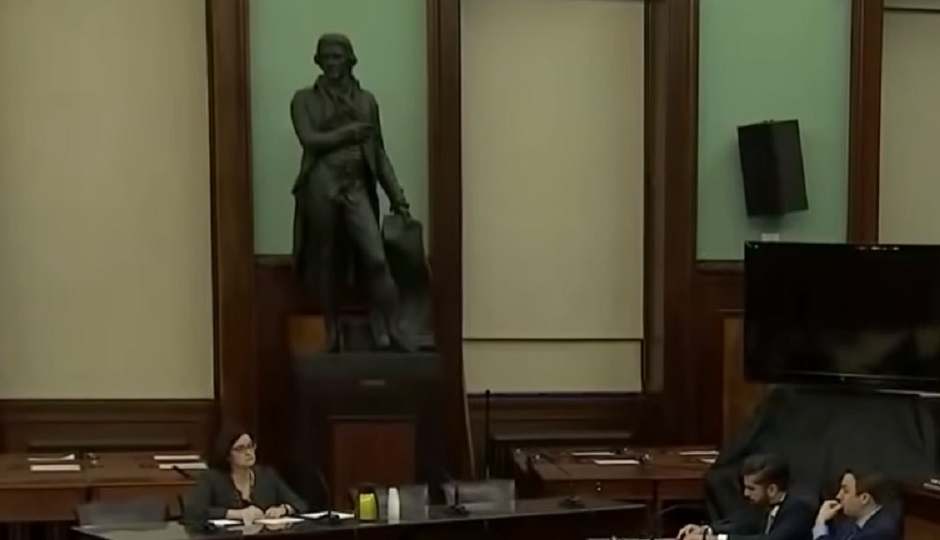 Surge Summary: “Woke” culture, “Cancel Culture”, has targeted American Founding Father for the chopping block. His statue must be removed from New York City Hall they demand – which is just the way one would expect Marxist-influenced revolutionaries to behave.

In our age of historical revisionism, the city officials in New York City have set their sights on a statue of our third president—Thomas Jefferson. This is a statue that has been in City Hall since 1833. It was moved about 80 years ago to the actual chamber where the business of the city is conducted.

“Jefferson Statue May Be Removed After More Than 100 Years at City Hall,” declares the New York Times. They note: “Black, Latino and Asian City Council members who find the sculpture oppressive and racist may finally win a two-decade fight to remove it from their chamber.”

The Times adds, “Though Jefferson, one of the nation’s founding fathers, wrote about equality in the Declaration of Independence, he enslaved more than 600 people and fathered six children with one of them, Sally Hemings.”

Of course, there is no justification from a moral and biblical perspective of slavery. Sadly, Thomas Jefferson was born into the tradition of slavery, and he did not free his own slaves—even though as a younger man, he did make some attempts to fight it.

Also, there are some who doubt that the DNA testing proved that Thomas was the Jefferson who had children with Sally Hemings. But that is a minority opinion.

When Jefferson wrote his first draft of the Declaration of Independence, it contained a strong denunciation of slavery and of the colonists’ attempt to at least stop the slave trade. A measure that King George vetoed.

Unfortunately, this slavery passage from the Declaration got cut so that all the members of the Continental Congress could unanimously agree on independence.

To me the most enduring legacy of Jefferson is that he helped set the framework by which the slaves could be free one day. As the author of the first draft of the Declaration of Independence, he made it clear that our rights come from the Creator.

Lincoln was greatly inspired by the truths of the Declaration of Independence. When he delivered his Gettysburg Address, the “four score and seven years ago” refers to the Declaration of Independence. To paraphrase Lincoln, America in 1863 was now poised in this great conflict to make those words of Jefferson apply to all—that “all men are created equal.

Dr. Mark Beliles is a minister in the Charlottesville area. After the melee in his city in 2017, he and a black minister teamed up to create “Healing4Charlottesville.”

Several years ago, Beliles and I joined forces to write a book on the faith (or lack thereof) of our third president, Doubting Thomas (Morgan James 2014). The book makes two main points: Jefferson was not a lifelong skeptic, and he didn’t believe in the separation of God and state.

I asked Beliles, president of the America Transformation Company, for a comment about this plan to remove the Jefferson statue in NYC. He told me that we find this statue-removal phenomenon in areas dominated by the left, not the right: “It is purely a partisan effort to appease radical elements in their party and get or maintain votes.”

Beliles noted, “But the whole reasoning is hypocritical since that very party was the one that defended slavery, and gave birth to segregation, Jim Crow, lynchings, and Ku Klux Klan and erected all the Confederate statues. Never did the Republican Party advocate those things.”

Beliles observes the irony in all this: “Furthermore, the reasoning for removing these statues is flawed because it requires alignment by historical persons to majority standards that did not exist in their era, and it has no logical end since there will always be found flaws in human leaders.”

Beliles adds, “There is no way to have a unified social identity as a nation with this flawed standard. In reality, it is a tool of disunion used by Marxists to undermine unity in culture and create an environment for revolution. It must be resisted.”

Jarrett Stepman, a writer and commentator with the Heritage Foundation, wrote a book, The War on History. In reference to this NYC-Jefferson controversy, he told me: “Thomas Jefferson was a great man and great American whose words and accomplishments have been a stumbling block to tyrants for the past two centuries…. That the New York City Council even considers removing his statue from city hall is an indictment on New York’s political leaders, not Jefferson.”

If only perfect people can have their statues remain, then how many statues can there be? In fact, the only perfect human being who ever lived was Jesus Christ. And yet just the other week a statue of Him was desecrated outside of a church in the greater Miami area.

In this attempt to remove Jefferson’s statue in New York City, the Marxist war on America as founded goes on unabated.