Chelsea Clinton’s military tribunal started sluggishly on Tuesday as her attorney, Robert S. Harrison of the Clinton Foundation, delivered an hour-long opening sermon that portrayed his client a victim of overbearing, abusive parents who had systematically, psychologically manipulated an impressionable young girl beginning on her 12th birthday, not long after Bill was elected President of the United States.

In an impassioned soliloquy, Harrison claimed that Bill and Hillary had forcibly groomed their daughter to one day run the Clinton Foundation and become President of the United States.

“Chelsea was taught to respect the affluent, the rich, the powerful, and to shun the poor and the underprivileged. Her parents told her that only the wealthy deserved to live normal lives, and the poor were disposable, could be thrown away like a dirty rag. But a young Chelsea was strong-willed, and though impressionable, she didn’t just blindly accept her parents’ view of the world. Like most young teens, she sometimes disobeyed her parents, but unlike most teens, she endured harsh, unspeakable punishments,” Mr. Harrison said.

Thirteen-year-old Chelsea Clinton, he said, had befriended a young African American boy, the son of a low-level White House staffer. When her parents learned of her newfound friend, they berated their daughter for associating with minorities and demanded she dissolve the friendship immediately. But Chelsea rebelled, telling Bill and Hillary that the boy was her best friend and that she hoped to one day marry him. 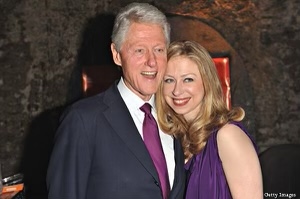 “So, what did Bill and Hillary do? They punished her, harshly. They drove their 13-year-old daughter to the seediest part of D.C. and told her “If you want to be with them, see how they live, that’s what your life will be like,” before dropping her off and making her walk all the way home. A similar incident occurred a year later, for which Chelsea was locked in a closet for two days and given only water. She developed Stockholm Syndrome, came to sympathize, and to empathize with her parents’ opinion of the world. If anyone here is a victim, it’s Chelsea Clinton. I have 600 pages of incidents I can read—”

“Please don’t,” Rear Adm. Darse E. Crandall, who was prosecuting the case on behalf of the Judge Advocate General’s Corps, said from behind the prosecution table. “I get it; you aim to elicit sympathy from our esteemed officers. But here are the facts: We are not prosecuting a 13-, 14-, 15-, or 16-year-old Chelsea Clinton. We are prosecuting a 41-year-old woman who ran both alone and alongside her mother, running a child-trafficking ring that saw hundreds, if not thousands, of children passed around among their ‘friends’ or outright sold to highest bidders.” 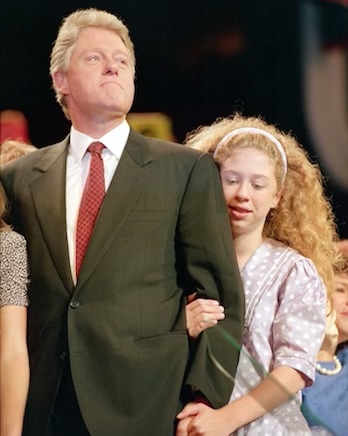 Rear Adm. Crandall called his first witness, Chelsea’s squirrelly husband Marc Mezvinsky, to the stand. Appearing in person as opposed to on ZOOM, Mezvinsky laid foundation on his relationship and business dealings with the Clintons. Under oath, he testified that he had no knowledge of the Clintons’ criminal ventures when he first courted Clinton in 2005.

“I’ve known the family since 1993, but Chelsea and I didn’t formalize a relationship until 2005, and married in 2010. I had no knowledge of their criminal conduct until after that,” Mezvinsky said.

“Can you explain, Mr. Mezvinsky, how it is that you knew the Clintons for 12 years prior to marrying Chelsea yet you were oblivious to their criminal actions? That seems unlikely,” Rear Adm. Crandall said.

Mezvinsky elucidated on how the Clintons had craftily insulated themselves to such a degree that no one outside their inner circle had knowledge of their crimes. He admitted to his own naivety, saying he was so smitten with Chelsea that everything beyond the scope of their relationship “became a blur.”  The Clintons, he added, were masters of camouflage and concealment.

“Were they really so good at camouflage, Mr. Mezvinsky, or did you simply choose to not acknowledge reality?” Rear Adm. Crandall asked.

“A bit of both,” Mezvinsky admitted.

At that moment, Clinton’s lawyer asked the tribunal’s permission to take a phone call. He excused himself, leaving the chamber for five minutes, and upon returning, asked Rear Adm. Crandall to put the tribunal on recess until Wednesday morning. He claimed “new evidence has come to light” that would unequivocally exonerate his client.

“Only because we have other matters to deal with today as well. But this tribunal will tolerate no delays after this,” Rear Adm. Crandall said.

He put the trial on hiatus until Wednesday morning.