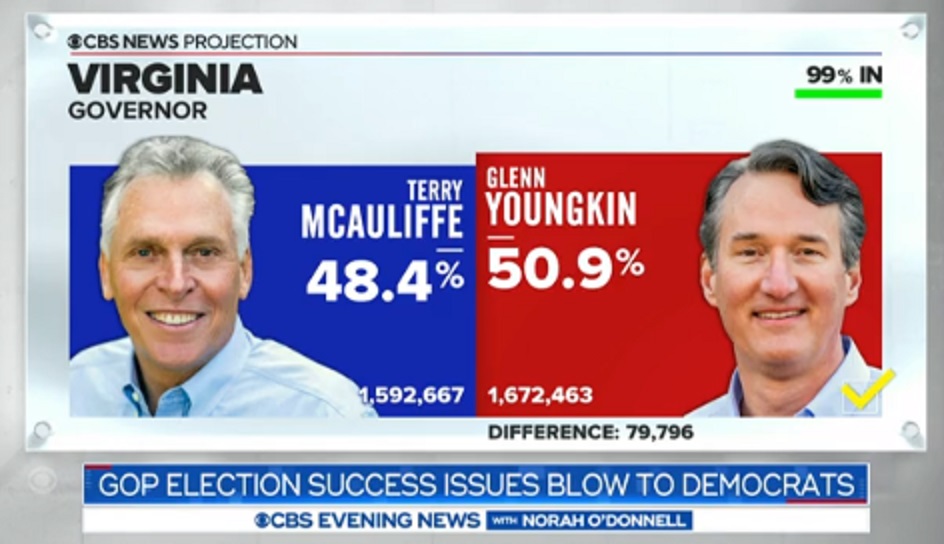 Surge Summary:  There are many lessons from the results of November 2nd mid-term elections: Chief among them, Democrats can’t expect hostility for Trump automatically to equate to election successes for their candidates.

At 9:18 PM on Tuesday night, long before the final Virginia election results were in, Townhall tweeted, “Larry Sabato: ‘It’s a bloodbath.’” (This was actually someone else’s opinion, quoted by Prof. Sabato during a segment on MSNBC with Rachel Maddow.) Breitbart.com soon picked up on the theme, making it one of the lead headlines for the night. What can we learn from this “bloodbath”?

First, this was not a referendum on Trump, who lost to Biden in Virginia by 10 points. To the contrary, as much as Democratic gubernatorial candidate Terry McAuliffe (and his surrogates, including President Biden and former President Obama) tried to make the race about Trump, Republican candidate Glenn Youngkin did the opposite.

And while Youngkin did not reject Trump’s endorsement or speak against him, he ran his own campaign as his own man, distancing himself from Trump. Pundits are now looking at Youngkin’s strategy as a potential winning Republican formula for 2022, robbing the Democrats of their ability to make each race an ongoing rejection of former President Trump.

Second, this was a referendum on Biden (for relevant exit polls, see here.) Had Biden’s popularity not been plummeting and had the state of America been dramatically better than it is today, the outcome of the election might have been very different.

In the words of New York Times writer Nate Cohn, “Biden has nearly the worst approval ratings of any president on record at this stage of his presidency.

“Just something to keep in mind if you’re struggling to understand what happened tonight.”

As of this writing (shortly after midnight, Tuesday night), the Republicans were poised to win the races for Governor, Lieutenant Governor, and Attorney General, along with taking back many seats in both local houses. And to repeat, just one year ago, Joe Biden defeated Donald Trump by 10 points in this same state.

It would appear, then, that the anti-Trump animus that carried Biden to victory has waned greatly in light of the current administration’s major failures and mishaps, not to mention the fact that COVID remains a very live (and controversial) issue.

This was confirmed by the gubernatorial race in New Jersey, a state in which Biden trounced Trump by nearly 16 percent, and yet a state in which the incumbent Democrat Phil Murphy and the Republican candidate Jack Ciattarelli were running neck and neck, to the surprise of most pundits.

As a temporary headline on the front page of CNN read, “The Republican candidates for governor are pacing ahead in states where Biden beat Trump by double digits last year.”

Third, the culture wars are real and parents have said enough is enough. Whether the issue was the dangerous, radical transgender agenda in children’s schools (see here) or a destructive, overemphasis on racism in school curricula (see here), it appears that the voters spoke on these issues too.

A review of the polling data points in this direction, as McAuliffe maintained a solid lead through much of the campaign, reaching as high as 10 percent and holding at 5 percent one month ago.

What caused the dramatic shift in the last 30 days? It had to be more than Biden’s failing popularity, since that has been tanking for months, especially since our bungled withdrawal from Afghanistan in August.

Instead, it appears that the shocking news that the rape of a Loudoun County teenage girl in the girls’ bathroom by a boy wearing a dress was covered up by the local school board drew a sharp response from many parents. (And remember: the apparent cover-up was in the specific context of supporting transgender extremism in the schools.)

Parental outrage was only heightened when the concerned parents became the targets of a federal investigation in which they were viewed as domestic terrorists.

Coupled with this was McAuliffe’s disastrous comment on September 29 that, “I don’t think parents should be telling schools what they should teach.” As much as he claimed that he was being taken out of context, his words were played over and again in Youngkin’s ads, with powerful effect.

As expressed in the headline to an op-ed by Joe Concha posted on The Hill on October 28, “Education blunder igniting suburban parents driving McAuliffe panic in Virginia.”

Of course, some on the left want to make these elections into a matter of race, as if those voting for Youngkin were largely white supremacists who didn’t want their kids to learn the truth about slavery. But how do they explain the election of Winsome Sears to Lieutenant Governor, making her the first black woman to win a statewide office in Virginia? And how do they explain the gains made by Republicans in other state elections, where children’s education was not the major focus?

Whether headlines predicting that, “A Youngkin win in Virginia spells defeat for Democrats in 2022” prove true remains to be seen.

But, since the same culture wars are being fought nationally, since Biden’s numbers may not recover, and since Trump is not running for election in 2022, predictions like these seem quite plausible at this stage of time.

For now, it appears that: 1) America is not willing to move even further to the left and, 2) to the extent leftist policies fail, to that extent they will be rejected. Anti-Trump animus can only carry the Democrats so far.

The post For Those Willing to See: Obvious Lessons from Virginia Elections appeared first on DailySurge.