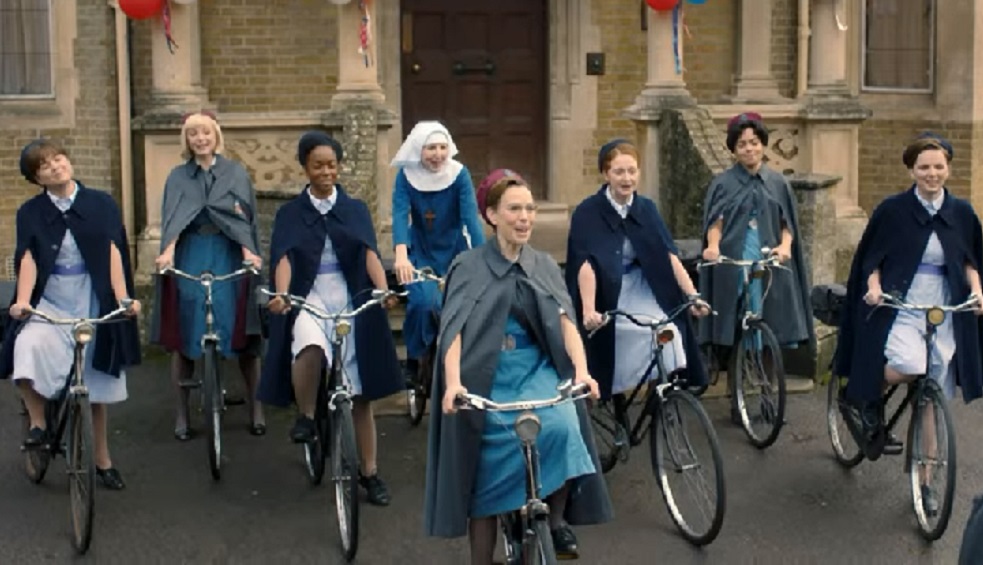 Surge Summary: In its tenth season, BBC dramatic series “Call the Midwives” suddenly goes “pro-choice”, contradicting much of what the values the show seemed to represent – and demonstrating the illogic and inconsistencies of the modern abortion movement.

How to wrap one’s brain around a popular British television series that, since its inception, has majored on themes maternal (delivering babies, tending to their mothers) but which — with scant warning — starkly morphs into a screed for legalized abortion? Would the term “schizophrenia” explain it? I suggest it might.

For the better part of a decade, my wife and I have been entertained, at times moved, at times inspired by the BBC’s “Call the Midwife” — a scripted period drama recounting the post-WW II doings of the “Nonnatus House”, an Anglican nursing convent serving London’s East End Poplar precinct. These intrepid caregivers, some “religious” (an order of nuns), some not, chiefly serve the lower-class neighborhood’s pregnant women. Week in and out, we’ve watched these solicitous ladies — plus a local physician and sprinkling of assorted other chaps who assist in miscellaneous ways — go to often heroic lengths to assure newborns’ successful arrival into the world. Along the way, they also assist those who’ve carried these little ones for nine-months.

Then: last Sunday night happened. Like the proverbial phonograph needle being dragged discordantly across a record album in the middle of a song, “Midwife” viewers were unceremoniously subjected to 45 minutes of lazy, pro-baby-killing codswallop (to borrow a bit of cheeky U.K. slang.) I won’t detail all the plot twists, but suffice it to say the same obstetric specialists who’ve been cheering on the wonder of motherhood and human birth for the past nine-and-a-half seasons abruptly became giddy champions of a mum’s “right” to snuff out that very wonder if the inclination so strikes her.

What makes the whole abject development ever more strange is, heretofore, the show handled the abortion issue — I thought — relatively even-handedly at least. Seasoned “Midwife” fans might recall 2019’s episodes which involved a nurse’s grandmother arrested for performing the illegal operations. Her grisly work was hardly presented in a particularly positive or noble light — much to my shocked delight in this anything-goes age. And then, a few weeks back, when the midwife named Trixie Franklin discovered a doctor for whom she was working was performing illicit abortions she was horrified — and let him know as much in barely diplomatic terms; appropriately so; and good for her.

Well, we should have realized that state of affairs couldn’t last in “woke” 2021. Sure enough, during the most recent screening of CtW?  It’s all rah-rah fetus-murder– euphemized, mind you, as “abortion”. The aforementioned Trixie goes public with her support of decriminalizing the lethal procedure; and virtually everyone offers her supportive attagirls. Evidently, “Midwife” ‘s powers-that-be couldn’t countenance even a fuzzy, rather non-committal impression that, perhaps, the act of a parent’s eradicating the life growing within her womb is anything less than stellar.

As the suddenly “enlightened” midwife makes her pro-choice debut on a national radio broadcast, her raptly listening co-workers are all smiles. Even a Pentecostal Christian Jamaican nurse character is shown practically beaming at Trixie’s “courage”.

Particularly off-putting is Dr. Turner, the kindly, ubiquitous sawbones who’s normally rescuing baby or mother in extremis. Alas, in this installment of “Midwife” — and in a flash — he veers from being one of my favorite characters to becoming one of my least. His toothy grin — once winning — lurchingly goes from captivating to creepy. By all means, kill the little ones! Smile! Sure, kill some more! Smile …

He irrationally hectors fellow series’ regulars (and thus, CtW viewers) about the urgency of solving the problem of back-alley in utero homicides by transferring them to a licensed, professional setting. Change the location, alter some legal verbiage and — voila! — the sordid and horrifying magically becomes pristine and defensible. Confoundingly, he and his wife enjoy a household composed in part of not one, but two, adopted daughters. So, Doc, their mothers would possibly have been better advised to dump them in a bloody bucket? Instead of bringing them to term? Instead of granting them a crack at a happy existence? Got it.

Again, like so much of the broader, contemporary “pro-choice” movement: schizophrenic.

Any attractive, principled alternate viewpoint is minimally depicted. The nun-in-charge, the unflappable Sister Julienne, offers a pinched, fidgety avowal of her pro-life perspective. If audience members listen really, really closely the they can pick it up … just barely. With wearisome predictability, though, she focuses on commending her colleague’s loyalty to her conscience.

One nurse intern fleetingly expresses disapproval of Trixie’s outspokenness; but does so in the most juvenile manner — frumping around the facility like a sullen eleven-year-old. Never fear, however! With more of that wearisome predictability she comes to her “you-go-girl” senses, undergoing an epiphany which instantaneously shifts her over to Team Trixie.

Yet another of the program’s male protagonists (shop-owner Fred Buckles) evinces a minor grimace over Trixie’s open endorsement of abortion; but mainly because it might stir up a bit of turbulence at a time in which society at large didn’t deem it positively ducky for a mother to do double duty as her infant’s executioner. His discomfort — like that of a handful of her associates — seems to be more tactical than moral. There’s another disconcerting incongruity here for the modern television viewer: Fred’s stepson Reggie suffers from Down Syndrome — a condition which, in 21st-century Western Civilization’s more “evolved” atmosphere, would more as not spell an abortion-induced death sentence for the lad well before he saw the light of day.

It additionally bears mentioning that, over the arc of this storyline, the lone individual who floats a glancing but meaningful pro-life argument — an older, white male, natch! — makes eminent sense. It’s questionable whether the program’s creative spirit’s meant it to come across that way, so that development may be unintentional. Still, if audience members will give his remarks a moment’s attentive reflection they are quite sensible. And, even more compelling: they essentially go unrefuted. If it’s domestic turmoil or poverty that is driving women of the United Kingdom to unlawfully terminate their offspring, he pleads, society should address those issues. There’s no need to authorize their lethal alternative. Trixie, for her part, can only respond with something to the effect of “Why can’t we do both?” — an emotional retort; not a logical one. If the root causes of this terrible “choice” are removed, “both” solutions are hardly justified. Case closed.

This episode, finally, features brief but repeated and near-reverential mentions of British Member of Parliament David Steel. He’s the lawmaker who pioneered the loosening of England’s laws against the odious act back in the 1960s. Thought-provokingly, in 2004 even this pro-abort trailblazer allowed that conceivably things had gotten a bit out of hand in the UK’s infanticidal protocols. Perhaps permissible abortions shouldn’t extend beyond the unborn victim’s twenty-second week of life? Instead of the twenty-four week cut off (if you’ll pardon my employment of that phrase)? Steel’s suggestion, however, ended up being scrubbed (oops, another awkward turn of rhetoric). Ironically, Steel’s political CV was dashed just a couple years back when it was uncovered he’d failed to deal transparently and firmly enough with a fellow MP who’d been involved in child abuse. Suggested headline? MP Who Led Fight to Legalize Abuse of Children in Womb Resigns Over Failure to Deal with Child Abuse in Parliament.

It seems libertine, secular, family-hostile, God-phobic Leftists befoul everything they touch. And so one more rare example of consistently pro-Christian, pro-life tv fare is transmogrified into anti-child agitprop. They are no doubt very proud of themselves. Decent folks, meantime? Those who don’t regard propagating the species as a dilemma to be vanquished? We experience a fresh dose of revulsion – and must resolve to keep clapping back for the innocents; even if their schizophrenic midwives abandon them.