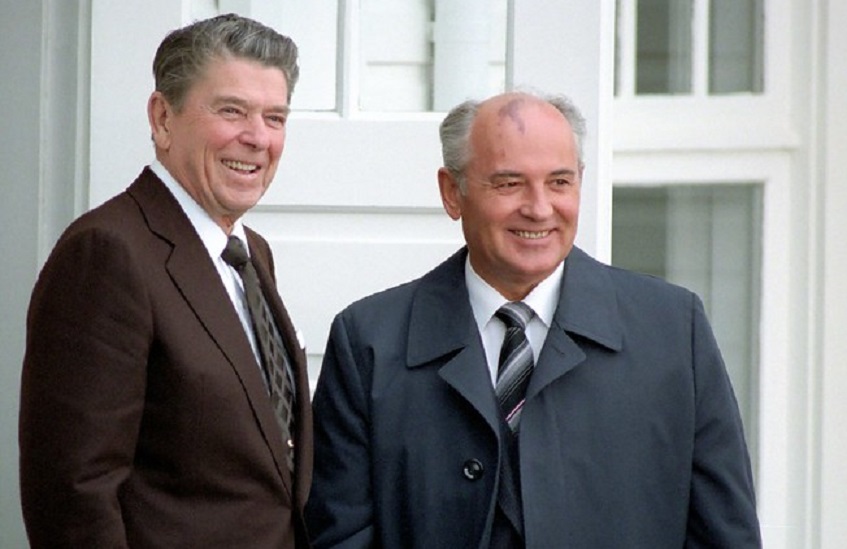 Surge Summary: As Ronald Reagan reintroduced the reality of God into the midst of the atheistic Soviet government during 1987’s Reykjavik Summit, so Christians today must bring back the foundation of God and His ways into secularist America.

In a few weeks we will celebrate the 35th anniversary of the Reykjavík Summit from 1986, where U.S. President Ronald Reagan and Soviet Premier Mikhail Gorbachev began what ultimately would become the fall of the Soviet Union.

As reported in Encyclopedia Britannica, “The meeting, the second between the two leaders, was intended not as a summit but as a session in which the leaders explored the possibility of limiting each country’s strategic nuclear weapons to create momentum in ongoing arms-control negotiations. The Reykjavík summit almost resulted in a sweeping nuclear arms-control agreement in which the nuclear weapons of both sides would be dismantled.”1

In Iceland’s capital, Reagan and Gorbachev would agree to a Washington Summit, to take place on December 8-10, 1987.

“Reagan has lost his mind,” I thought.

Next came the agreed upon Moscow Summit, May 29-June 2, 1988, between President Reagan and General Secretary Gorbachev. Paul Kengor described the summit in a Christianity Today article under the heading “Ronald Reagan’s Mission Trip to Moscow.”

He wrote: “Appropriately, [May 29] was Sunday. Reagan’s self-ascribed role of religious emissary started in that initial ceremony. As he finished his conventional opening remarks, he stunned those gathered by pausing to deliver this direct salutation to the general secretary and his comrades: ‘Thank you and God bless you.’

“While such a closing is hardly unusual to American ears, it was unheard of in the Soviet Union, an officially atheist country where religious content was prohibited from television and radio [and where Sunday schools were against the law, children could not legally attend church, and parents were legally forbidden to teach their children about God even in their own homes]. … facts [that] Reagan knew well. As Reagan’s words were translated for all Russians to hear, the hardened Kremlin atheists visibly blanched.

“Gorbachev’s translator, Igor Korchilov, braced himself and recorded that these words rang like blasphemy to the Soviet officials: ‘The heretofore impregnable edifice of Communist atheism was being assaulted before their very eyes [by Ronald Reagan].’”

Secular historians will insist that Moscow was a meeting between U.S. President Ronald Reagan and General Secretary of the Communist Party Mikhail Gorbachev held from May 29 to June 3, 1988. A meeting where they finalized the Intermediate-Range Nuclear Forces Treaty [INF], discussed bilateral issues like Central America, Southern Africa, the Middle East, human rights, and the pending withdrawal of Soviet troops from Afghanistan … yadda, yada, yada.

What actually happened was that Jesus Christ, Son of God and Lord of Life, was advanced through the agency of Ronald Reagan and in one fell swoop outmaneuvered atheistic communism, initiating the future collapse of the Soviet Union.

The historical Reagan/Gorbachev event was brought to mind again through a report on the recent National Conservatism Conference in Orlando by David Brooks, a NY Times columnist and contributing writer at The Atlantic.3,4

Brooks expressed his appreciation for Rachel Bovard [born 1984], Policy Director of the Conservative Partnership Institute, and serving on the board of the Council for National Policy Action, among other high-level activities relating to fighting for conservative policies in Washington.

Characterizing conservatives as insufferably naïve in believing that liberals and conservatives both want what’s best for America, Ms. Bovard maintains that “Woke elites – increasingly the mainstream left of this country – do not want what we want. What they want is to destroy us. Not only will they use every power at their disposal to achieve their goal, but they’ve already been doing it for years by dominating every cultural, intellectual, and political institution.”

“Bovard [had] the place rocking,” Brooks noted, “training her sights on the true enemies, the left-wing elite: a totalitarian cult of billionaires and bureaucrats, of privilege perpetuated by bullying, empowered by the most sophisticated surveillance and communications technologies in history, and limited only by the scruples of people who arrest rape victims’ fathers, declare math to be white supremacist, finance ethnic cleansing in western China, and who partied, a mile high, on Jeffrey Epstein’s Lolita Express.”

“The national conservatives,” he added, “thus describe a world in which the corporate elite, the media elite, the political elite, and the academic elite have all coagulated into one axis of evil, dominating every institution and controlling the channels of thought.”

Yoram Hazony, a Modern Orthodox Jew, Chairman of the Edmund Burke Foundation and President of the Herzl Institute in Jerusalem, spoke at the conference on the topic of “de-fusionism”. He struck the nail on the head with his argument that “If conservatives want to stand up to the pseudo-religion of wokeism, they have to put traditional religion at the center of their political project.”5

Just like President Reagan suggested in his mission at the Moscow State University in 1988, Jesus Christ, Son of God and Lord of Life, should be placed front and center in the rough and tumble of the Soviet square.

The problem in America, in the view of Hazony, “is that LGBTQ activists today, like American Jews in the 1950s, are trying to expel Christianity from the public square. This threatens to render the public square spiritually naked. Wan liberalism collapses in the face of left-wing cultural Marxism. Eliminating God and scripture in the schools … was the turning point in American civilization. Above all else we’ve got to get God and scripture back in the schools.”

We fully agree that the removal of prayer from public education in 1962 [Engel v. Vitale] and the Bible from public schools in 1963 [Abington School District v. Schempp] by the ultra-liberal Warren Court unmoored American culture from its Christian anchorage.

Take for example the Obergefell vs. Hodges decision in 2015. A 5-4 majority came up with a constitutional right to homosexual marriage as already existing in the U.S. Constitution, to next codify it into law and thus demonstrating that law has become what a majority of nine Justices any given day can agree upon.

By decoupling legislation from its Biblical base, which provided the foundation for judgement, lawmaking is now nothing more than existential relativism, meaning that “no judicial decision is ever final, that the law both follows the event [is not eternal or certain] and is made by man (is not divine or true.]”6

Due to the Warren Court’s catastrophical legacy and further bizarre decisions by other judicial radicals causing the nation to turn to other gods, America has ceased to be America. Whereas God’s loyalty and fidelity that guard the nation wholly depend on a nation seeking virtue, righteousness no longer appears to exalt this nation.

Reverend William Kay [1894-1980] pointed out the two sides of Christian character. On the one hand, “God’s soldiers can only maintain their war by priestly self-consecration,” while on the other hand, “God’s priests can only preserve their purity by unintermitted conflict.”

To that end, every church in America should have a pastor, elder, deacon, or congregant running for local office in 2022: school board, city council, county commissioner, parks and recreation, etc… and during each political cycle thereafter.

Calling upon Gideons and Rahabs to stand in the public square!

The post God at the Center Again: The Best Hope for Western Democracy appeared first on DailySurge.