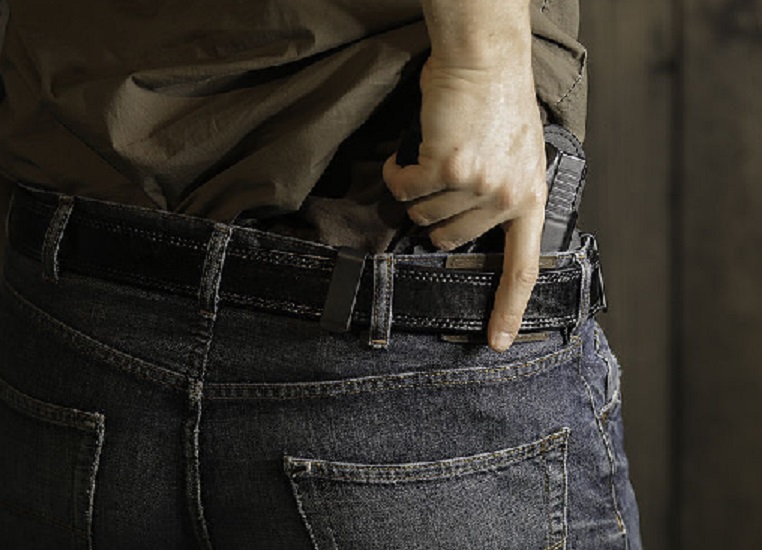 Surge Summary: It’s settled: there are lots of law-abiding “good guy” Americans who are armed and on our streets – making things safer for themselves and others.

The news media sells shock and revulsion to keep us watching through their many advertisements. Politicians lie to us so we will vote for them. Both have told us that guns are frighteningly dangerous, and that we’d be safer if more honest citizens were disarmed. We’re tempted to believe them if that is all we know. Now, we have data that calls their story into question. We confirmed something we’d long suspected about good men and women who legally carry personal firearms in public. Now we know that concealed carry and armed defense are common.

The mainstream media tells us about crime all the time. What the news media seldom bother to tell us are the many stories where good guys stop crime with a personal firearm. We don’t see that news article even though armed defense happens several times for each time a criminal uses a gun during a crime. (Criminals only use a firearm in about 8% of violent crimes.) In contrast, our neighbors use a firearm for self-defense about as often as criminals commit any violent crime, either with or without a gun in the criminals’ hands.

One claim that the media and anti-gun advocates use is that good guys don’t carry a firearm in public. They claim that if armed defense happens at all, then it is extremely rare. That would be odd because we already know there are more than 20 million of us who have a license to carry a concealed firearm.

Now that we know they are out there in public, do good guys and gals with a gun make us safer or less safe? We’ve looked at criminal records, so we know that private citizens who have their concealed carry license are extraordinarily nonviolent and law abiding. It is no surprise that police officers are dozens of times more law abiding than the average citizen. What surprised me is that citizens who have their carry permits were several times more law abiding than even the police. We can’t find a group of people who are more law abiding and less violent than concealed carry permit holders.

When they do have to use their firearm, licensed concealed carriers are both more accurate and several times less likely to shoot the wrong person than the police. That is old news, and we were told it didn’t matter since no one except the police and criminals actually have a gun in public. We might have suspected that wasn’t true, but now we know. Now we know the media’s claims were false.

We don’t see our neighbors carry their gun because concealed carry is concealed. We don’t ask our neighbors if they are carrying a personal firearm with them in public. Maybe you ask them, but I don’t. Now, someone did.

The 2021 National Firearms Survey asked if people carried a personal firearm in public. On-duty police and security guards were considered separately. Over 50 thousand of us answered the survey.

We learned that guns and gun owners are everywhere. Two of the largest anti-gun states, California and New York, also had some of the most firearms owners compared to other states.

Where the state permits it, many gun owners carry a firearm in public for personal protection. That happens in some areas even in “anti-gun” states. There are many counties in California and in New York where ordinary citizens with a clean criminal record will get their carry permits if they ask for them. That isn’t the portrait the media paints of gun owners in those red states.

Having a personal firearm can make us significantly safer. Examples where the armed victim defended themselves dwarf the number of firearms accidents. Being armed increases the gun owner’s safety, the safety of their family, and the safety of their neighborhoods. About a third of all gun owners in the survey reported using a firearm for personal defense, though most of those self-defense events were at or near their home and not necessarily in public.

As you would hope, our armed neighbors were wonderfully reluctant to use lethal force. More than 80 percent of armed defense incidents ended without the defender having to fire a shot. The victim saying he was armed, showing the firearm, or threatening to shoot was enough to stop most attacks.

That is good news, but it shouldn’t surprise anyone. You don’t want to shoot someone, and neither do your neighbors who own a gun.

We also learned more from this year’s firearms survey. When we asked them, many of our neighbors said how often they go armed in public. They were offered several choices to describe how often they carried; always or almost always, often, sometimes, only in dangerous situations, and never. That created four broad categories for those who carry in public. I narrowed the end categories to 20 percent, and gave the categories of “often” and “sometimes” a range of 30 percent each.

Shown below, I estimate that over 17 million of us legally carry a concealed firearm in public every day. That works out to between one in 12 and one in 13 of the adults over the age of 21 are carrying in public each day. In round numbers, call in one-in-a-dozen adults on the street. 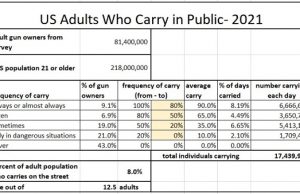 Of course, there are more gun owners in some states than in others. We suspected that when we found that over 50 percent of adults in some counties had their carry permits. In contrast, the state of Hawaii hasn’t granted a single concealed carry permit to an ordinary citizen this year.

In general, the fraction of carry permits issued is much lower in some deep-blue cities in deep-blue states. The obvious examples are New York, New Jersey, and California. In cities like Los Angeles, in New York City, and in Trenton, police chiefs and judges only gave concealed carry permits to their friends. Politicians and judges get permits, but ordinary citizens like us can’t.

What isn’t well known is that concealed carry permits are issued in some rural counties in California and New York. Those permits allow ordinary citizens to carry in every county in that state.

We assumed that there were no good men and women with guns on the street because we didn’t see them. Now we know they are there.

Good men and women carry their personal firearms near us even if we can’t get a permit from our sheriff. Armed Americans are at our coffee shop in the morning. They are on the road with us as we drive to work. They work next to us. They are sitting at the restaurant, and they are in the store where we shop on the way home. They are our neighbors, and they use a firearm to defend themselves over a million times each year. Good for these honest citizens, and it is good for all of us that they protected themselves and their families.

Gun ownership is common and one-out-of-a-dozen of us are carrying in public today.

Now we must ask why in some counties half the adults have their permits, yet that right is denied to all the ordinary citizens in some states.
~_~_~_

I gave you 1200 words. Please share them with a friend. RM

The post Yes, There Are Lots of Armed Good Guys on Our Streets … Now We Know It appeared first on DailySurge.