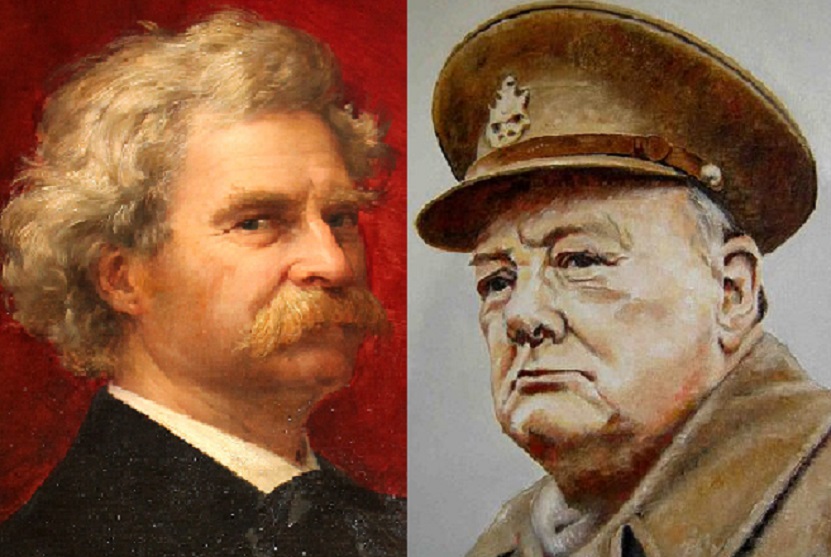 What do Mark Twain, the highly celebrated American author, and Winston Churchill, the monumental British politician, have in common? Quite a bit. Both were born on November 30, albeit almost 40 years apart—Twain in 1835 and Churchill in 1874.

These two towering figures of their respective eras also both lost an infant child; both had a strong sense of adventure and varied life experiences; both smoked many cigars every day and liked to write while in bed. Both Twain and Churchill penned articles and books and gave lectures to earn income; both struggled with debt several times in their lives. Both married in their mid-30’s and had wives they cherished as confidantes and on whom they depended greatly.

In addition, Twain and Churchill both cared deeply about their public persona and sought to shape how posterity would view them. Churchill did so by writing the history of major events in which he participated, from the Boer War to the Cold War. Twain planned to keep his name before the public for many decades by writing manuscripts that were to be published after his death. Twain’s distinctive appearance and extraordinary wit made him the archetypal American for many British; four decades later, Churchill’s heroism made him the archetypal Englishman for many Americans. Both had complex, enigmatic religious views that changed over time. Strikingly, Churchill won a Nobel Prize in literature, but Twain did not.

Twain helped to arrange an American lecture tour for Churchill in 1900–1901. The literary lion introduced the 26-year-old newly elected member of Parliament at the Waldorf Astoria in New York City on December 12, 1900 as “the hero of five wars, the author of six books, and the future Prime Minister of Great Britain.”[1]  His prophecy came true but not until 40 years later.

Twain also used his introduction to criticize the bellicosity of both Britain and the United States. “I think that England sinned in getting into a war in South Africa which she could have avoided without loss of credit or dignity,” he asserted, “just as I think we have sinned in crowding ourselves into a war in the Philippines on the same terms.” The two nations were “fellow thieves and robbers”; they were “kith and kin in war and sin.”

Churchill wrote later that he was thrilled to spend time with the famous author. When they argued about the Boer War, Churchill had retreated to the position of “My country right or wrong.” When a “country is fighting for its life, I agree,” Twain replied, but such was not the case in South Africa. Churchill concluded, however, that he had not displeased Twain because the author inscribed “every one of thirty volumes of his works for my benefit.” In his twilight years, Twain energetically opposed imperialism and war.  In contrast, Churchill would often defend the British empire’s actions as he participated in World War I, helped save the West from Germany’s onslaught in World War II, and challenged the Soviet Union during the Cold War.

Both Twain and Churchill deplored the social evils of their day. Twain, Harold Bush, Jr. argues, was “a raving Jeremiah” who decried his era’s social and ethical injustices. Arguably, no other American literary luminary wrote so persistently, passionately, and provocatively, about religious issues and social ills during the Gilded Age. Throughout his long writing career, Twain denounced social injustice, political corruption, sexism, economic exploitation and inequality, and corporate and personal greed. He strove to reduce discrimination against African Americans, Asian Americans, Jews, women, blue-collar workers, and immigrants.

In recent years, numerous scholars and biographers have denounced some of Churchill’s social and political stances, perhaps most notably Geoffrey Wheatcroft’s “Churchill’s Shadow: The Life and Afterlife of Winston Churchill” (2021). Churchill has often been derided as a racist and an imperialist. Briefly consider, however, some of his social concerns and political actions. As a member of the House of Commons from 1906 to 1914, Under-Secretary of State at the Colonial Office, President of the Board of Trade, and Home Secretary, Churchill argued that the state had a responsibility to assist vulnerable citizens and helped pass legislation to aid the sick, destitute, unemployed, and poorly paid workers. In 1908 Churchill argued for implementing a network of state intervention and regulation to abolish child labor, limit adults’ work hours, and provide jobs planting trees and building roads and unemployment insurance.

As Home Secretary, which included responsibility for maintaining law and order, supervising the police and probation service, regulating the immigration service, and overseeing the prison system, Churchill gained insight into how Britain’s low-income families lived; his numerous visits to urban slums increased his desire to use government resources to help the indigent. Historian Paul Johnson argues that Churchill “was impelled by a genuine passion for the least fortunate members of society, by a strong belief that society could be made both humane and more efficient.” Churchill worked to reform Britain’s penal policies by creating better prison conditions, stopping the incarceration of minor offenders, and restructuring sentencing guidelines. For decades, Churchill also warned about the horrors of war, attacked materialism, and insisted that socialism and communism were based on a faulty view of humanity and destructive to political, economic, and social life.

Although flawed human beings like the rest of us, Twain and Churchill offer much for us to appreciate as we celebrate their shared birthday in 2021.

Gary Scott Smith is the author of “Duty and Destiny: The Life and Faith of Winston Churchill” (2021) and “Mark Twain: Preacher, Prophet, and Social Philosopher” (2021)