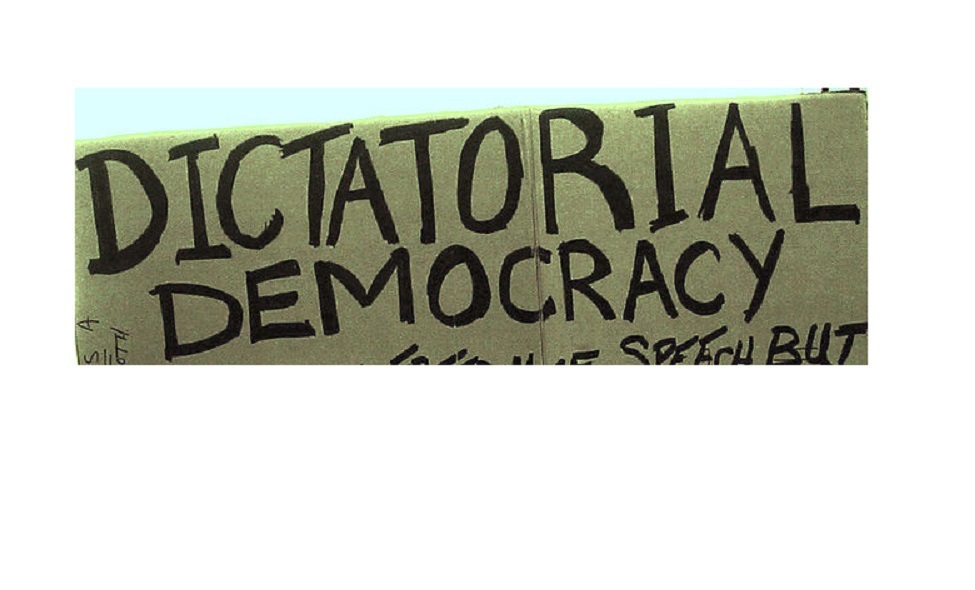 Surge Summary: Democrats are taking radical steps to turn America’s government upside down — in the name of saving what they claim is “Democracy”. All kinds of measures are being advocated from the Left which would undercut America’s Founders’ intentions to produce a nation which is a Constitutional Republic; and in which every American has a say.

In the name of “democracy,” Democrats want to get rid of our current system of government.

That’s no small thing, given that the Constitution has held up for 240 years – longer than any other.

The founders’ design of a federal republic with representative decision making and checks and balances has ensured unparalleled freedom and prosperity, unlike “democratic people’s” regimes around the world.

Some Democrats are so angry at West Virginia Sen. Joe Manchin for capsizing Joe Biden’s $5 trillion socialist Build Back Better bill that they want to do away with the U.S. Senate and replace the two-senators-per-state rule with proportional districts like the House. This would effectively end our constitutional republic.

“We need structural change,” said Sherrilyn Ifill, president of the far-left NAACP Legal Defense Fund. “We are in crisis [because] too many structural flaws can be exploited.”

We certainly are in a crisis, in fact, many.

Hundreds of thousands of illegal aliens are swarming across the border every month and shipped all over America. TV networks are giving this zero coverage, not just short shrift, according to a study by the Media Research Center. Meanwhile, Democrats are still obsessed with the Jan. 6 Capitol riot, calling it an “insurrection” against “our democracy.”

Another crisis is 7 percent inflation and a 10 percent increase in producer prices. This is eating away at family budgets and retirees’ savings like Pac-Man gobbling up dots on the old video game.

Yet another crisis is the explosion in crime, particularly murders and other violent offenses, in major cities run by Democrats who have defunded police. Radical district attorneys like Philadelphia’s Larry Krasner and Chicago’s Kim Foxx, both of whom won with help from anti-American billionaire George Soros, are letting criminals run wild.

Ms. Foxx has special renown for trying to get Jussie Smollett off the hook before the actor was convicted of faking a hate crime that featured fictional Trump supporters uttering racist and anti-gay slogans while beating him up.

How about the crisis of government overreach, with COVID-fueled lockdowns, mask and vaccine mandates for private businesses and mass firings of health care workers, first responders and members of the Armed Forces who refuse to go along?

Another crisis is adverse reactions to the shots, which is a mystery. We have no idea how many people have been harmed. The topic is absent from the Democrat media’s wall-to-wall COVID coverage.

I could go on, but you get the idea. The only “crisis” that Democrats seem to care about is resistance to their fast-track scheme to turn America into a top-down, communist country in the name of “democracy.”

Sen. Dick Durbin of Illinois last year introduced a bill to abolish the Electoral College, the constitutional mechanism that ensures the whole nation will have a say in who governs us, not just the East and Left coasts.

Democrat-run state legislatures also are joining the National Popular Vote Compact, which would make the Electoral College moot. Whoever wins the popular vote nationwide would automatically get the electoral votes of those states even if he or she lost them.

Miffed at the U.S. Supreme Court’s hearing signaling a reassessment of Roe v. Wade in the Texas abortion law case, Sen. Elizabeth Warren of Massachusetts has endorsed packing the Court with four more justices. In support of her stance, Washington Post columnist E.J. Dionne Jr. opined that the current Court embodies “radicalism,” and that “democracy, justice and moderation itself demand that we not capitulate.”

One conservative group drawing leftist fire is the Constitutional Sheriffs and Peace Officers Association, who pledge to uphold the Constitution even if democracy-loving politicians won’t.

“America needs to make a strong turn around to get back on the freedom track laid for us by our Founders,” the Association says on its website. “We believe it can’t be done from the top down, due to many factors, not the least of which is corruption and entrenched bureaucracies in high places. We must, and we can, accomplish this turn-around starting locally at the county level, and lower. The office of county sheriff is the last hope of making this happen.”

Well, bully for them for taking on the bullies.

Naturally, The Washington Post turned one of its columnists loose on the group. In a piece entitled, “Beware the extremist, dangerous and unconstitutional ‘constitutional sheriffs,’” Kristy E. Lopez warns that the sheriffs are “undermining law enforcement accountability and distorting public policy more broadly.”

Their worst sin? The sheriffs are committed to enforcing immigration laws that the feds won’t.

Ms. Lopez says that to “protect communities from abusive policing and our democracy from extremists within law enforcement,” [it] may mean changing state laws so that sheriffs are appointed rather than elected.” So, in the name of “democracy,” she wants to do away with letting people vote on who their sheriffs will be.

In Federalist 10, James Madison warned that democracies, as opposed to republics, are “spectacles of turbulence and contention; have ever been found incompatible with personal security, or the rights of property; and have in general been as short in their lives, as they have been violent in their deaths.”

Madison had a special warning about political demagoguery.

“Theoretic politicians, who have patronized this species of government, have erroneously supposed, that by reducing mankind to a perfect equality in their political rights, they would, at the same time, be perfectly equalized, and assimilated in their possessions, their opinions, and their passions.”

In short, they would become communists. Which sounds a lot like the Democrat Party’s drive to wipe out all distinctions and shared powers in the name of “democracy.”

When politicians talk about “investments” and “enhanced revenue,” it’s time to secure our wallets.

When they wax on about “democracy,” it’s time to band together to secure all our God-given rights against their tyrannical intentions.

The post Democrats’ Dark Side of Democracy Would Tear Down America’s Constitutional Form of Gov’t appeared first on DailySurge.