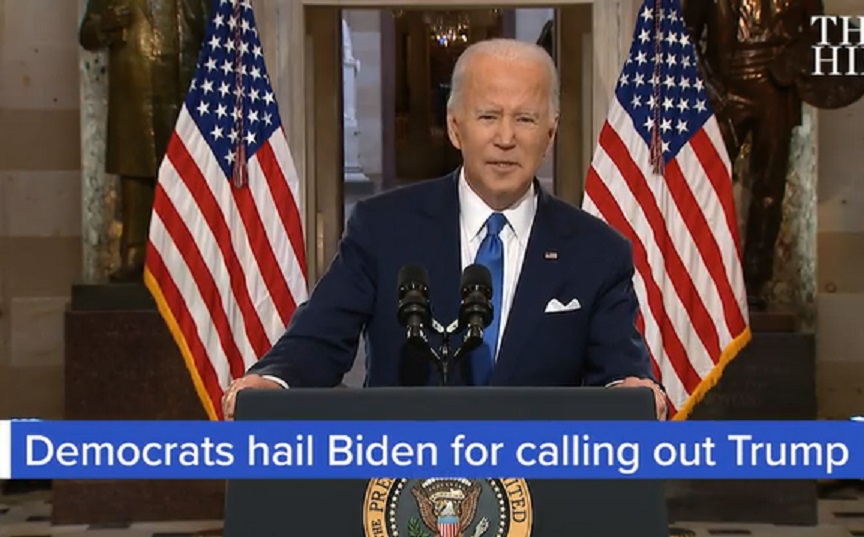 Surge Summary: From the get-go, Democrats and members of the American Left have aimed to leverage the unfortunate events of January 6, 2021 to advance their political and cultural agenda. They will succeed if the citizens of the United States fall for their manipulation.

Jan. 6, 2021 – The estimated crowd size in Washington D.C. that day: one million citizens. Why were they there? The vast majority of demonstrators were there to support the America First movement, to hear President Trump speak about the state of the nation in the wake of a suspicious national election, and to urge Congress to look carefully at allegations of election fraud brought forward by many thousands of election workers who signed affidavits testifying under penalty of perjury that the election was rigged.

To this day, those thousands of citizens alleging fraud have been silenced, threatened, or marginalized by Democrat operatives who claim to represent the will of The People, as President Biden repeated today.

Speaking of operatives, it has been clearly shown that far left operatives that day worked in common cause with federal operatives to provoke the so-called insurrection. The entire record can be accessed at www.warroom.org, www.revolver.news and here: https://podcasts.apple.com/us/podcast/the-fbi-jan-6th-ft-jack-posobiec-darren-beattie/id1551541889?i=1000539816495

Speaking of the will of The People, 40% of all likely voters polled say they believe the election was highly irregular and upwards of 77% of Republicans believe it was fraudulent. So, in light of these numbers, which have held for a year, what kind of President claims the support of The People?

On Jan. 6, 2021, as a comparatively small number of demonstrators breached the Capitol, my first reaction was: this is stupid. Congress was in session. Congressional representatives were assembled to certify electors from various states. Many people were hoping VP Pence would determine, according to the Constitution, that several states had participated in election irregularities resulting in skewed results. The overriding voice from the one million demonstrators called for lawful review since mounting evidence strongly indicated election fraud. Pence could have, and should have, responded positively to calls for investigations during the Congressional session. Sadly, ill-advised violence, sparked by operatives of various kinds, disrupted deliberations, serving only to discredit all demonstrators unfairly.

And of course, as is their custom, Democrats seized on the event to launch a year-long investigation culminating in the soon to be formalized congressional investigation into so-called insurrectionists accused of treason by Biden, many of whom languish in solitary confinement, with no charges brought.  So much for DUE PROCESS.

Let’s keep in mind that the preceding summer was marked by upwards of 250 riots nationwide, massively violent events resulting in many deaths and injuries, events largely ignored or applauded by Democrats, people again found leveraging violence for private political gain. Indeed, Kamala Harris and others spearheaded efforts to bailout Antifa and BLM law breakers, most of them released without charges.

Yet the U.S. Attorney General claims there is no such thing as a two-tiered system of justice in America, a man who investigates parents at school board meetings, a man who joins Biden and the whole cabal characterizing Jan. 6 as a combination of the Civil War, Pearl Harbor and 9/11!  In 1941, President Roosevelt called the Japanese sneak attack on Pearl Harbor, “A day that will live in infamy!”

The Democrat sneak attack on Jan. 6 protestors is also an infamous day for it served the purposes of Biden & Co. to attempt to discredit the America First movement and forever disqualify President Trump from public office. So much for respecting the will of The People. So much for fidelity to the truth.

As with the Russian Hoax, the Ukraine Hoax, the baseless impeachment proceedings against Trump, and this new hoax leveraging Jan. 6, Democrats can only prevail if the vast majority of common sense Americans drink the kool aid and fall for the Big Lies, that Trump sparked an insurrection, that America First is a group filled with Nazis, that Democrats are pure as the new fallen snow, that only the administrative state should wield power, that the deep state should never be challenged, that the Constitution is merely advisory, and that anyone challenging the established order deserves no DUE PROCESS, rather, any such person deserves solitary confinement, their lives destroyed.

January 6, 2021 was a sad day. Some conservatives played into the hands of radical Democrats. Law enforcement was used for political theatre. Speaker Pelosi refused Trump’s offer to provide additional law enforcement in advance, as if she knew something ahead of time. Congress failed to fully inquire after allegations of election fraud. Trump failed to sufficiently dissuade violence, just as his silence today is regrettable. And Democrats have blood on their hands because we all know the only people killed or seriously injured on Jan. 6 were those opposed to Democrat malfeasance.

Through it all, the serial failure in the White House presumes to lecture us about patriotism and morality, a man found lacking in all of it, a man receiving the lowest approval rating in history, one speaking today to spark an insurrection against the truth.

The post Jan 6: Infamous Day Left Is Manipulating for All Its Worth appeared first on DailySurge.