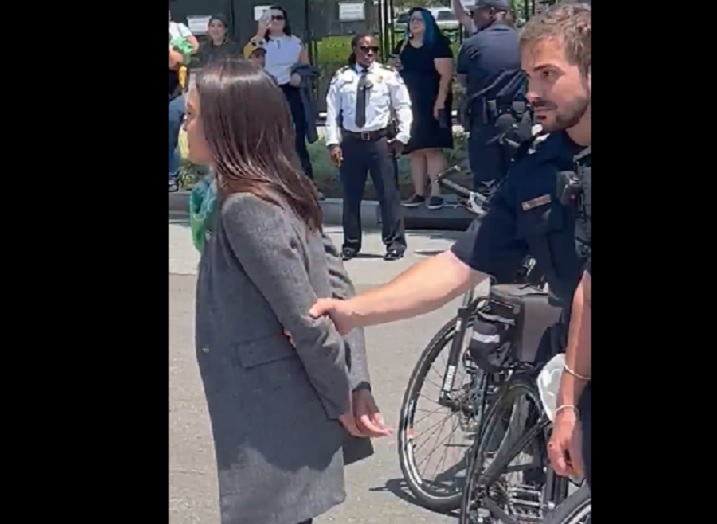 Surge Summary: From Monkeypox to transgender propaganda to Leftist lawmakers’ being “handcuffed” and arrested, deception and dissembling rule the ranks of Progressivism and are key to its success.

Matthew Vadum is an award-winning journalist and author of the book, published in 2011, “Subversion Inc.: How Obama’s ACORN Red Shirts Are Still Terrorizing and Ripping Off American Taxpayers.”

ACORN stands for Association of Community Organizations for Reform Now. The U.S. Congress voted to eliminate federal funding to ACORN with a 345-75 vote in the House and 83-7 in the Senate. A short time later, ACORN disbanded, filing for Chapter 7 liquidation, effectively closing the organization in 2010.

Vadum’s book, however, isn’t just the story of ACORN, it’s the story of how community organizers just like President Obama are undermining America from within.

“Courageous truth-teller Jordan Peterson has been suspended from Twitter for daring to express an opinion that opposes the agenda of transgenderism, a take-no-prisoners ideology that he believes threatens the very underpinnings of both our society and Western civilization as a whole.

“Commentator Lisa Boothe summed up the state of play in recent tweets, which themselves place her in jeopardy of expulsion from Twitter. ‘The transgender stuff needs to be a red line,’ she wrote. ‘We cannot live in a world of fiction and make believe.’

“‘If they can convince society that dudes can be girls and girls can be dudes, we are officially owned. Down is up and up is down. There is no wrong or right at that point,’ Boothe wrote.”1

Vadum’s comment that “people who consider themselves transgender deserve sympathy; they are largely miserable,” was confirmed by UC Berkeley School of Law professor Khiara Bridges’ testimony last week before Congress that “one out of five transgender persons has attempted suicide.” It must be a miserable existence.

Where have we seen something resembling the transgender hype and subterfuge before?

In the 1960s homosexual advocates pleaded for “libertarian acceptance” of their conduct in such humble words as “Please allow us to live our lives in the privacy of our homes.” When their pleas received a sympathetic ear, they changed their tune. Their initial humility turned into false pride and oppressive totalism, demanding that Christian bakers, Christian photographers, and Christian retreat centers take part in their weddings or be bankrupted by the State.

If Hillary Clinton had become president in 2016, full-blown fascism would have been the nation’s lot: “You’ll cheer at our weddings or go to jail.”

One day Evangelicals will learn that elections have consequences.

The gaslighting by government bureaucrats, Big Tech, Big Pharma, and Big Media’s free-speech censoring is getting out of hand. Jordan Peterson responded in January to podcaster Joe Rogan that being transgender is a “sociological contagion,” likening it to “satanic ritual abuse.” The social acceptance of the trans community is a symbol of “civilizations collapsing,” he said.2

The word sex as denoting the biological condition of being male or female has been in usage in the English language since the early 15th century. However, as the word took on erotic qualities in the 20th century, gender came to be the usual English term for the biological sex of human beings. In the 1970s, certain non-scientific branches of academia invented an entirely new concept for ‘gender’. It now became the way people present themselves in society or how they ‘feel’ about themselves. Under the guise of ‘science’, both the American Medical Association [AMA] and the WHO are complicit in making such an artificial but false distinction between sex and gender.

According to the WHO, gender interacts with but is different from sex. “Gender and sex are related to but different from gender identity. Gender identity refers to a person’s deeply felt, internal and individual experience of gender, which may or may not correspond to the person’s physiology or designated sex at birth.”

In other words, feelings, sensations or sentiments trump everything else, including manifest physical and physiological facts. Removing or reconstructing secondary sexual characteristics [so-called gender reassignment] won’t change the innate biology.

While this certainly isn’t politically kosher, Dr. Bruce K. Waltke commented, “Immanuel Kant said one can tell whether or not something is right or wrong by whether it can be practiced universally. Same-sex marriage practiced universally is suicide. To survive, gays and lesbians are parasites, depending for their cultural survival on couples that birth the next generation.”

In Proverbs 10:1, Solomon addresses those who refuse to think about the consequences of their actions or decisions: “A wise son makes his father rejoice, while a stupid son is his mother’s misery.” Jewish Hebrew scholar Michael V. Fox considers the use of the word stupid a good rendering of the Hebrew word k’sil “because stupid refers not to a simple lack of intelligence but to a smug intellectual laziness, a refusal to think of the consequences of one’s deeds.”

As to present-day America, the Book of Deuteronomy indicates that spiritual compromise in a nation leads to debacle and failure. How much more so will that apply to a nation, as the Mayflower Compact specifies, “founded for the glory of God and advancement of the Christian faith.”

America has turned its back on God. The outlawing of the Bible from public education in Abington School District v. Schempp in 1963, the banishment of the Ten Commandments from public schools, courthouses, and government buildings in Stone v. Graham in 1980, and the fraudulent discovery of homosexual intercourse and marriage in the Constitution in 2015 will be followed by more official acts of disregard and exclusion in the near future, unless Evangelical and Pro-Life Catholic Christians will get their act together by starting to engage in the rough and tumble of the public square.

Representatives Alexandria Ocasio-Cortez’s [D-NY] and Ilhan Omar’s [D-MI] performance last week in front of the U.S. Supreme Court protesting against the overturn of Roe vs. Wade provides a striking example of this. As both these sanctimonious dissemblers were led away by the police, they held their hands behind their backs pretending to be handcuffed. They weren’t. It was just one big burlesque and gross perversion. shorturl.at/bdklR

This brings us to the latest ruse by the Centers for Disease Control and Prevention [CDC] concerning the media-hyped monkeypox, a contagious viral disease related to smallpox that is spread primarily among homosexual men through gay merrymaking.

Whereas the CDC rushed to shut down the country and subsequently all its churches for a respiratory virus relatively harmless for the general population [except for the elderly and immunocompromised], the titular public health agency has failed to call for dropping Gay Pride Month due to monkeypox or urging homosexuals to restrain from decadent behavior and group sex.

In obedience to Jesus’ ekklesia Kingdom assignment from Matthew 16:18, every church in the nation should have a pastor, an elder, deacon, or congregant running for local office in 2024, 2026, 2028, and thereafter if America is to resurrect.