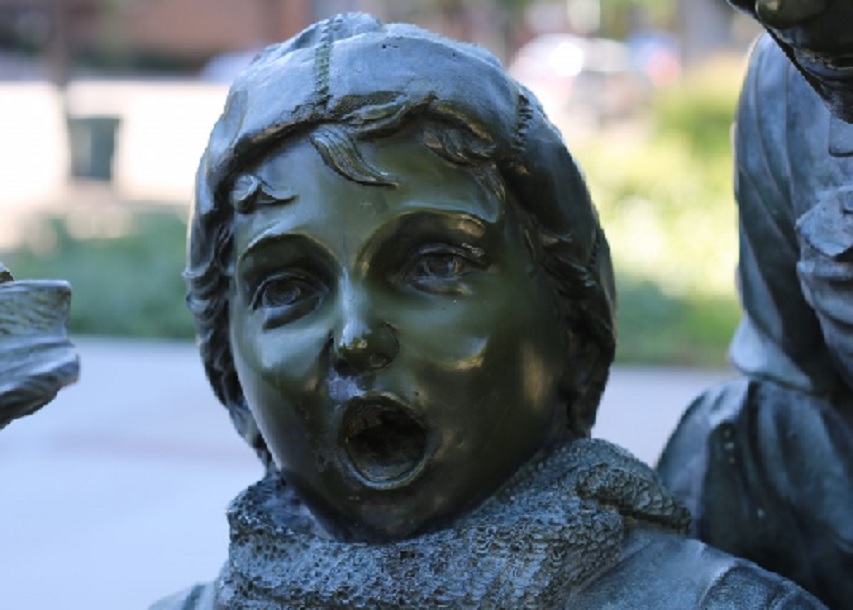 Surge Summary: In some place, men are now allowed to walk around naked in women’ spas. And some parts of major media are defending it. Proof: LBTQ radicalism is making modern society lose its mind.

Just think of the upside down world in which we live today. Women and girls are relaxing in a California spa when a man walks in, naked and fully exposed, in full view of these mothers and daughters. Yet when a complaint is issued, the spa, along with the editorial board of the Los Angeles Times editorial board, defend the man. Do we need any more proof that we have lost our corporate minds?

A man commits full frontal indecent exposure in the presence of women and girls, and the LA Times chides the women for being upset while defending the man, since, after all, he’s actually a woman. And, you know, women can have penises too. That’s right. And men can menstruate as well as conceive and give birth to babies. That’s also why we must talk about “chestfeeding” rather “breastfeeding,” since the latter term would offend nursing fathers.

Have we not lost our minds?

Listen to this woman’s personal account of what happened:

“I went to the Wi spa in Los Angeles, California, and while I decided to go around the different jacuzzis, I decided to take a nap. After my nap, I got up and I wanted to get water. As I was walking, I noticed something that really was disturbing, something that caused me to feel that I must have been transported into the men’s locker room, the men’s Jacuzzi area.

“I was appalled at what I saw. This was not normal. . . . Little girls are there, their mothers are there, other women are looking about, and they begin to put their robes back on them. I went to management. Management did nothing. I even told the guy he should leave, ‘This is not right,’ and he didn’t leave. We had no help whatsoever. I did not know what to do.

“Something has got to be done. This is not fair. It is not right. We as women have rights to be safe in public spaces, and they are being violated by men going into women’s spaces, claiming to be women to gain access, so that they can exercise their perversions.

“This is not right. We must do something about it.

Yes, this used to be considered perverse and even illegal. But not today. Today, this is a “right” to be celebrated. And it is the women and girls who have a problem. They are the ones who are messed up in their thinking. The onus is on them to change.

As explained in the upside-down editorial in the LA Times, “As complicated as the opposing beliefs might be, it is clear where the rights in this matter land. Everyone — transgender customers, members of every faith and women who are upset by the sight of penises — all have the right to use the spa and other public accommodations.”

Indeed, the Times’ editors opined with some of the most convoluted thinking imaginable, “no one has an absolute right to feel comfortable all the time. People have a right to use the spa, but that doesn’t include with it a guarantee that they all will feel at ease with everything they see. They might prefer a spa where a certain amount of body covering is required.”

This used to be called indecent exposure. You could go to jail for this.

But not today. Today it is just a needless “hullabaloo,” to quote the exact term used by the Times. We’ll get over it soon enough.

Yes, the Times editors tell us, “Young people are far more comfortable with the idea of shared spaces for people of all gender identities and sexes.”

Absolutely. I’m sure an 8-year-old or 12-year-old or 15-year-old girl, sitting naked in the steam room, is super comfortable with a 40-year-old naked man sitting down next to them. Of course!

To repeat: this is madness.

Yet the self-righteousness and moral perversion of the Times knows no bounds. To quote the closing words of the editorial, “In the meantime, customers of public-serving businesses should be prepared to share space with the public, in all our forms, varieties and customs. Antidiscrimination laws stand for the principle that all are welcome, whether we are comfortable or not.”

But no, we can’t, because transgender activism trumps all. It trumps morality. And decency. And honor. And common sense. Just say, “I’m trans!” and anything goes.

And what about sexual predators who have already used these loopholes to enter ladies’ bathrooms and the like? That’s too bad, we are told, but the priority is protecting those who identify as transgender.

I ask again: what kind of madness is this? How and when did we entirely lose our minds?

And what an absolute and ridiculous farce to allow for these abuses to take place under “antidiscrimination laws.” Talk about legal mumbo jumbo. Talk about turning right into wrong and wrong into right.

As for the man who truly believes he is a woman, here’s a word of wisdom for you: you do not belong in the women’s spa, naked and exposed, even if to the core of your being you believe you are female.

Moreover, no one is making you go there, and your life will not be hurt if you stay out of a place where there are naked women and girls. (Let’s be realistic here. We’re not talking about withholding lifesaving treatment or essential medical care from someone who identifies as trans. God forbid. We’re talking about biological males not exposing themselves around women and girls. Please get a grip.)

Sir, male plumbing remains, and if you expose that plumbing in the sight of the opposite sex you should pay the penalty for indecent exposure.

Alas, in today’s upside world, where perversion is celebrated and common decency is denigrated, shame is hard to find.

Back in 2016, during a debate over transgender access to school bathrooms and locker rooms, the Charlotte Observer infamously opined that, “Girls must try ‘overcoming discomfort’ of seeing ‘male genitalia’ in bathrooms.”

I commented in response, “Transanity indeed.”

Is there any other way to describe it? Do we need any further proof that we have lost our corporate minds?

I rest my case.

The post Remember When LBTQ Activists Assured Us This Kind of Thing Would Never Happen? appeared first on DailySurge.