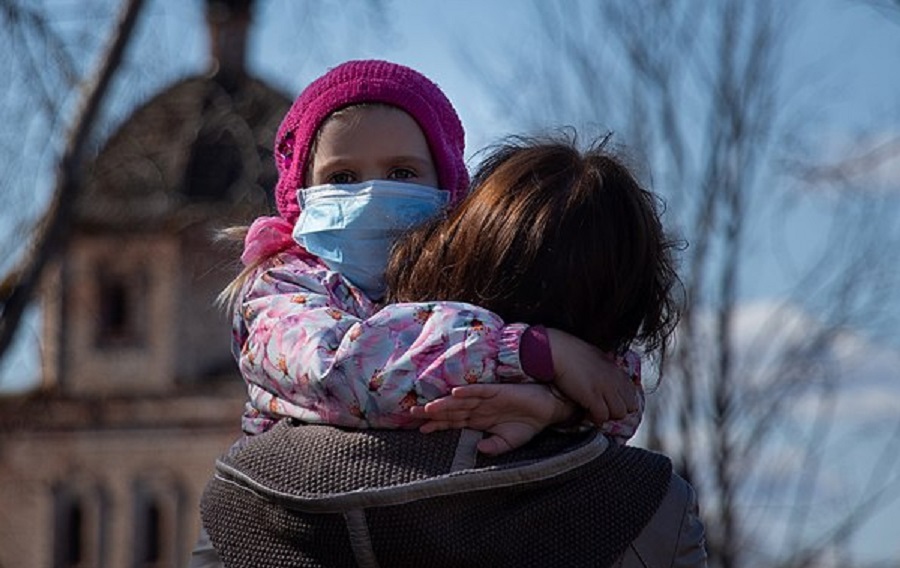 Surge Summary: Regarding requiring children to wear masks, many today insist, “If it saves the life of just one child, it’s worth it!”. Does that reasoning apply when it comes to taking action to protect the lives of unborn children from the American genocide of abortion?

In city after city, the same statement is used to promote mask mandates and forthcoming vaxing for children in schools. Washington, D.C. already passed an ordinance to vax children without parental consent.

Recognize the narrative? “If it saves the life of just one child, then it’s worth it!”

Watching children in our neighborhood walking in the open air with parents to their school bus, many are complying as they dutifully have masks in place before boarding buses and entering classrooms.

Moms and dads say, “It’s the new normal and we just have to get used to it to safeguard the lives of our little ones. After all, we don’t want to lose any of our precious sons and daughters.”

Embracing the sanctity of human life as we all should, I understand their thinking, although I don’t necessarily agree regarding masking. Shouldn’t we all concur with the adage, “There’s no such thing as a life not worthy to be lived.”

The Declaration of Independence declares: “We hold these truths to be self-evident, that all men are created equal, that they are endowed by their Creator with certain unalienable Rights, that among these are life, liberty and the pursuit of happiness.”

On the 25th anniversary of “The View” (9/7/21), Whoppi Goldberg angrily said it was her “right as a Christian parent” to have her grandchild aborted if there was an assault. Today many don’t agree, aware of compassionate alternatives available for the baby.

1 Chance in 62,500
When it comes to mask mandates, we need to be alert, exercise discernment and be reasonable. Even the leftist, Progressive New York Times in a recent article entitled “Kids, Covid and Delta” (6/18/21) acknowledge that children have a much higher chance of dying from a car accident, homicide, drowning, heart disease and cancer than COVID-19!

Even with the Delta Variant surge since May 21 of this year, the CDC statistics reveal the chances of those 18 and under dying from Covid are .000016 or about 1 in 62,500! Picture a stadium filled with this many children and one becoming a fatality! Even that can be questioned because of other underlying conditions.

Knowing this data, should we attach a moistened, bacteria-laden face mask covering the nose and mouth of all children for eight hours a day?

Considering 40,000 Americans die yearly in car accidents and 90,000 from drug overdose, should we eliminate cars and prescriptions? We will never eliminate all sickness and unfortunate deaths so we have to assess risks and mitigate what we can when information and technology advances.

Which brings us to the controversial yet critical subject of abortion and the unfolding cultural shift where a majority are now opting for restrictions and protection of unborn babies (only 19% now agree with “late term” termination of a baby’s life). Sophisticated fetal and sonogram technology makes it crystal clear that we’re not dealing with a “blob” or murky “tissue” but a living human being, a developing child with all DNA present from conception.

It’s time for a turnaround from the immoral stain on our nation’s recent history of excusing the extermination of 61 million babies (2400 daily plus more induced by abortifacient drugs)? Not just Black Lives Matter but all lives matter!

A Heartbeat Away
Mother Theresa spoke to representatives of the world stating “abortion is the greatest injustice and destroyer of life occurring in the world.” She said our number one priority wasn’t global warming, poverty or race relations. Addressing the argument of an “unwanted child” she said, “where there is one, bring the baby to me.”

This humble servant inspired a dear friend of mine, Janet Porter, a champion for human rights. Through her compassionate and relentless work and classic book, “A Heartbeat Away,” the “Texas Heartbeat Law” was enacted, a seminal event for America.

This modern day Joan of Arc/Rosa Parks inspires us all to shed selfishness and safeguard the life of every child waiting to be born with this bold statement:

“There is a place in the United States where most children whose lives are threatened by abortion are now legally protected. Texas is the first state in the nation able to actually enforce their Heartbeat Law of the 14 states which have passed Heartbeat Laws so far. The Texas Heartbeat Law went into effect at midnight September 1st after attempts to block it through the 5th Circuit Court of Appeals and the US Supreme Court failed.”

Now it’s time for courageous political leaders, pastors and people to follow suit. Jesus called us to be “salt” in holding back decay and our moment has arrived to be a voice and make a difference!

Leaders Offer Resources
I’ve been actively involved in the pro-life movement from its inception. Living in Washington, D.C. our family attended the March for Life for decades and have four adopted children within our immediate family. Avail yourself of my FREE YouTube videos and accompanying book on this theme [BullseyeChallenge.com] to equip you to become an informed influencer.

I commend Lila Rose and her “Live Action” global ministry to help you. This young woman began at the age of 14 after being inspired by the life of Corri ten Boom who along with her family risked their lives to rescue persecuted Jews from Hitler’s Holocaust extermination.

She’s a spitfire woman of courage and compassion rightly maintaining abortion is a “human rights violation.” She recently announced she’s expecting a baby boy in November saying, “His body is not my body and I do not have the ‘right’ to kill him.”

Dr. Alveda King is the niece of Rev. Martin Luther King, Jr., mother of 6 and a magnificent pro-life activist. Check out her outstanding ministry on behalf of the most vulnerable in our midst.

Google “Pro-life Ministries” like these and multitudes of others ready to support you in standing up for unborn children. Get engaged in your state to see the Heartbeat Bill passed in your locality! Vote only for pro-life candidates and don’t be fooled by “Catholics” like Biden, Pelosi and others aggressively promoting taxpayer funded abortion on demand until the very moment of birth and even beyond.

My Body, My Choice?
As you learn how to winsomely and confidently speak on behalf of unborn babies and the Heartbeat Bill in your state, then step out in conversations to help change the hearts and minds of people you know. Start by posting this article on social media!

Just days ago my wife had a wonderful conversation with someone she loves dearly on this topic. Afterwards, I sent both of them an article by Dr. Michael Brown, entitled, “An Open Letter to Women Who Say ‘My Body, My Choice’”

Here’s the Deal: Norma McCorvey, “Jane Roe” of Roe v. Wade, said before she died: “I am dedicated to spending the rest of my life ending the law that bears my name.” Days ago the baby who was targeted for the landmark case revealed her identity and that she’s the mother of three children. Thank God all were spared from the radical feminists’ deception! Let’s follow the Word of God (Prv. 3:8-9) and the “Lone Star” state’s lead knowing “If it saves the life of just one child, it’s worth it!”