In the midst of all the chaos, like an ministering angel appearing in the midst of battle, a pastor named Luke came up to me, place his hand on my shoulder, and gave me a message. He looked me in the eyes and told me that God had sent him to pray for our, and he did.

Last night, a ragtag bunch of NTEB’ers from all across America, pack a giant box filled with gospel tracts, and boarded a bus headed for downtown Saint Augustine for the annual Nights of Lights holiday celebration. On the surface, the atmosphere was fun and jovial, with millions of white lights twinkling out seasons greetings as nearly 20,000 people filled the streets of America’s oldest city. But from the moment we stepped out and started preaching, the spirit of Antichrist rose up full force to greet us. Welcome to the front lines of the end times.

“I charge thee therefore before God, and the Lord Jesus Christ, who shall judge the quick and the dead at his appearing and his kingdom; Preach the word; be instant in season, out of season; reprove, rebuke, exhort with all longsuffering and doctrine.” 2 Timothy 4:1,2 (KJB)

NTEB has been preaching on the streets in Saint Augustine since 2012, the only exception being not going out much in the COVID year of 2020. But in the nearly 10 years that we have been doing it, never have I seen so much anger and hatred towards the gospel of the grace of God as we saw last night. We were verbally accosted, threatened, physically attacked and forced into a fistfight to protect one of the women ministering on the streets with us. It was a wild scene, man, a crazy, wild scene. But God was good and He ’caused us to triumph’ in the Lord Jesus Christ.

“Now thanks be unto God, which always causeth us to triumph in Christ, and maketh manifest the savour of his knowledge by us in every place. For we are unto God a sweet savour of Christ, in them that are saved, and in them that perish: To the one we are the savour of death unto death; and to the other the savour of life unto life. And who is sufficient for these things? For we are not as many, which corrupt the word of God: but as of sincerity, but as of God, in the sight of God speak we in Christ.” 2 Corinthians 2:14-17 (KJB)

In the midst of all the chaos, like an ministering angel appearing in the midst of battle, a pastor named Luke came up to me, place his hand on my shoulder, and gave me a message. He looked me in the eyes and told me that God had sent him to pray for our, and he did. As Pastor Luke prayed, I felt the oppression of the battle begin to lift, and I knew we had the victory on the streets. From that moment forward, the whole spirit of the streets changed. I am very thankful to Pastor Luke for stopping and being faithful to God’s call. We sure needed it at that moment.

“Are they not all ministering spirits, sent forth to minister for them who shall be heirs of salvation?” Hebrews 1:14 (KJB) 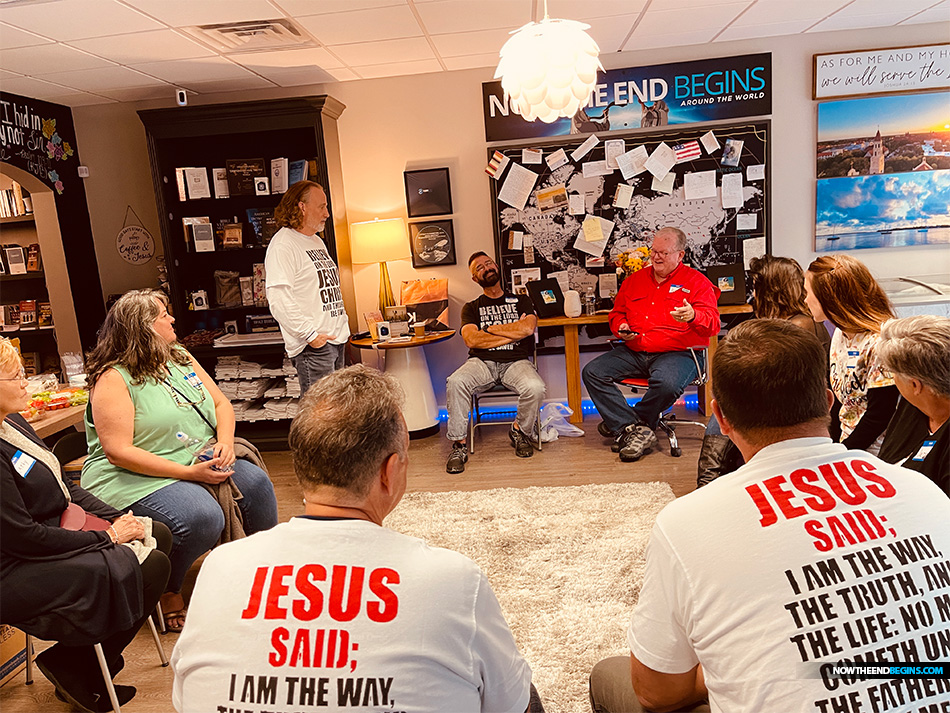 Before we went out to street preach, we had a wonderful time at the Bookstore of food, fellowship, and fervent prayer that the Lord would bless our efforts, and He sure did!

Everyone who was with us last night got a first hand look at what it’s like to preach the gospel of the grace of God on the streets, just like they did in the first century. Some of us last night got a little more than we bargained for, but in the end, everyone had that peaceful and satisfied look that only those who are obedient to God’s call can truly know and understand. Please pray that those thousands of gospel tracts we handed out will bear much fruit for the Lord. Maybe next time you will come with us!