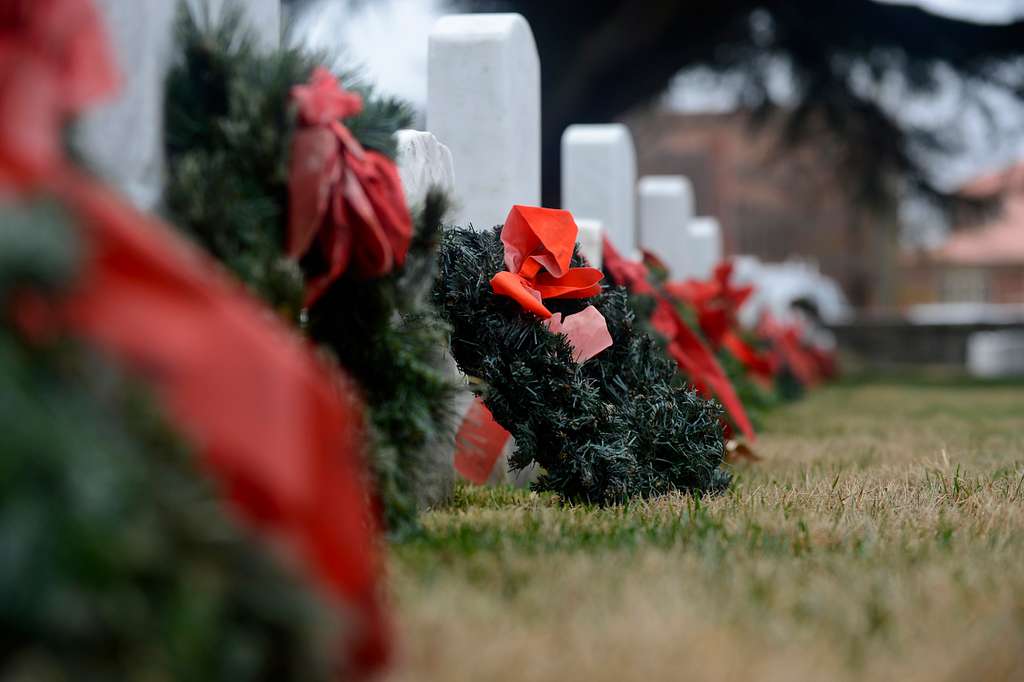 Surge Summary:  Secularist groups don’t allow Christmastime to dissuade them from their efforts to strip all vestiges of Christianity from the American scene. Of course, their American history is distorted and the nation’s Founders would be horrified.

For almost 30 years, a group called Wreaths Across America has honored America’s military dead by voluntarily placing wreaths at their graves.

But just in time for Christmas this year, a secularist legal group raised a stink about this attempt to honor the memory of America’s fallen. And they’ve also (temporarily) shut down Bible verses on military dog-tags. They did this because of their false, but popular, misreading of the First Amendment.

In an interview with  Fox News(12/14/21) Mikey Weinstein, founder and president of the Military Religious Freedom foundation, said that placing the wreaths is “like carpet-bombing…That looks like it’s a Christian gang sign, that you’re creating territory that is a Christian territory.”

Weinstein also issued a statement saying, “On December 18, the graves of all veterans in our country’s 155 national cemeteries and numerous other locations where American veterans are buried, will be indiscriminately decorated with Christmas wreaths by the organization Wreaths Across America. The grave sites of Christians and non-Christians alike will be adorned with this hijacked-from-paganism symbol of Christianity—circular and made of evergreen to symbolize everlasting life through Jesus Christ—whether the families of the deceased veterans like it or not.”

However, Karen Worcester, executive director of Wreaths Across America, told Fox News that they do have a policy of not putting a wreath on graves with a Star of David.

Weinstein’s group has also complained about a ministry that has made millions of dog tags with Bible verses on them. The Pentagon has now announced they will pull the plug on this ministry.

First Liberty Institute, which fights for religious freedom in the courts of our land and in the courts of public opinion, writes about the ministry: “Shields of Strength replica dog tags bear various symbols, emblems, and logos from each branch of service (Army, Navy, Air Force, or Marines) on one side and an inspirational scripture verse or reference on the other.”

But Weinstein sent a complaint to the Pentagon, which led to a cease-and-desist letter to stop the dog tags. Thankfully, First Liberty Institute has sued the Defense Department for violating First Amendment freedoms by blocking the tags.

Weinstein’s crusade against wreaths and Scripture verses on the dog tags is part of a long-standing secularist assault on the First Amendment, which has been quite successful.

They have converted the first clause in the First Amendment, which was historically understood to mean that there is to be no national denomination in America into a virtual “search and destroy mission against any sneaky vestiges of religion,” to borrow a phrase from a Christian law professor.

America’s founders did not intend to banish God or Biblical influence from the public arena.

But secularists, like Weinstein, have turned America’s religious freedom on its head. The founders gave us freedom of religion—which incorporates the views of those who don’t believe. What Weinstein and company want is freedom from religion, which grants only freedom for the unbeliever, but not the believer.

The secularists invoke Thomas Jefferson as if this were his wish. As I’ve written before, it was only by the Supreme Court distorting one of his letters in 1947 that effectively changed “no establishment of religion” to “the separation of church and state.”

But Jefferson would not agree with this wholesale attempt to purge God from America’s public life, including the military—which, by the way, has been hiring chaplains at taxpayers’ expense since before we even became a country.

In his Virginia Statute for Religious Freedom, written in 1777 and adopted in 1786, Jefferson said that Jesus is the reason we should honor diversity of religious opinion in this country.

He wrote, “Almighty God hath created the mind free… all attempts to influence it by temporal punishments, or burdens, or by civil incapacitations, tend only to beget habits of hypocrisy and meanness, and are a departure from the plan of the holy author of our religion” [emphasis added].

He went on to say, “the holy author of our religion, who being Lord both of body and mind, yet chose not to propagate it by coercions on either, as was his Almighty power to do.”

He is referring here to Jesus Christ, and portions of this quote are chiseled into the wall of the Jefferson Memorial in Washington, D.C.

This is no small point. Jesus is the reason that people in this country are free to believe or not believe, argued Jefferson in this document that has often called a forerunner to the First Amendment. It is to God, not the state, that we will all answer.

The Military Religious Freedom Foundation, the ACLU, the Freedom from Religion Foundation, and similar organizations claim to be protecting liberty. But their work is to actually destroy the precious liberties explicitly protected in the First Amendment.

The post Secularist Forces’ ‘Search and Destroy Mission’ Against Religion – Even During Christmas Season appeared first on DailySurge.